'Nearness of Death' Our Man in the Middle East

The other day I urged you to watch this space. I said I hoped BBC Watch would unpack the factual errors in the 6th episode of Jeremy Bowen’s  radio 4 series Our Man in the Middle East.

“Episode 6: ‘Crossing the Divide’. Jeremy Bowen’s early afternoon “Our Man in the Middle East” slot on Radio 4, threw up a number of questionable Bowenisms. I hope BBC Watch picks them up soon. Watch this space.”

Here is BBC Watch’s much-needed analysis.
Bowen’s selective potted history of Israel’s creation is riddled with crucial omissions. If this represents the public's primary source of information on the Middle East it’s hardly surprising that so many Brits sympathise with Israel’s enemies. Here is BBC Watch’s closing summary:

“Bowen’s basic story is, as ever, a very simple one: according to him, white “pale-faced” Europeans took over a land inhabited by passive ‘indigenous’ Arabs. In order to promote that politically motivated version of events, he has to omit context and relevant background information which would enhance BBC audiences’ understanding of the story as it stands today. As we once again see, Jeremy Bowen has no problem at all doing that.”

I think Jeremy Bowen sees himself as a kind of performance artist and poet, delivering his prose in an accent that seems to be part Welsh, part mid Atlantic gangsta, part Philip Marlowe. 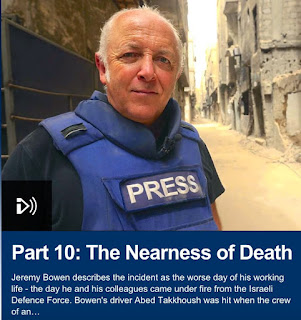 In the episode devoted to the incident in which his Lebanese driver Abed was killed by Israeli soldiers, (No. 10) Bowen himself describes in stark detail the catalyst that cemented his anti-Israel sentiment.
This sorry tale sheds light on the angle upon which Bowen’s entire narrative has been shaped.  Bowen feels guilty because he thinks his own miscalculation was responsible for his driver’s death, at the same time as being unable to forgive the trigger-happy Israelis for mistaking him, with his pink shirt on, for a potential terrorist. The occasional nods given to Israel’s victims sound ‘grafted on’ and come over awkwardly; as pure lip-service.

With this in mind, and Bowen has made no secret of it, the fact that the BBC saw fit to appoint him as the BBC’s Middle East editor, while still claiming, with breathtaking arrogance, their scrupulous impartiality beggars belief
Posted by sue at 19:55