When Boris Johnson was heckled in West Yorkshire, “the Heckle” was the BBC’s headline all day. To be honest, I’m not sure if the other channels followed suit, but someone observed:

“The Prime Minister gave a speech in the north of England during which a man heckled him (surely not an unusual occurrence for any politician) yet what made the headlines and was the focus of the news story? The heckling. 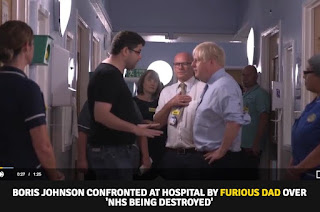 So what I’m saying is, um, the media’s focus seems a bit suspect. Never mind. I won’t go into that today. The hooha around that peculiar hospital corridor confrontation by ‘a concerned father’ had particularly nasty repercussions. Social media, the mainstream press and the online world were fizzing with vitriol.

Remember all those theatrical political interventions on Question Time that were frequently presented as ‘random’, but which “Turned Out” to be more or less orchestrated party political stunts? Hard-left activists seem keen on that sort of attention-seeking, but I suppose it’s kinda legitimate in a direct-action kinda way.

Anyway, what I’m saying is, did you see the vitriolic avalanches that befell poor Laura Kuenssberg when she Tweeted her….. let’s call it ‘reality check’ Tweet.  “Turns out” etc Look on Twitter. It’s horrendous.
“Turns out the man who challenged the PM is also a labour activist”

Incidentally, the Indy has the man’s daughter at “7 months” whereas Twitter mostly has her at “7 days” and one paper (I forget which) had her at “7 years”. Seven somethings, probably. Oh well, that’s reporting for you.

I think Laura Kuenssberg has had a rough deal here. I think she had to mention that the good Omar Salem was a Labour activist, otherwise the BBC would have been heavily criticised by the likes of me.

Whether she was wise in using the term “turns out” is another thing, because, if you think about it, there is a hint of cynicism in that two-word opener because the implication could definitely be that the whole thing was primarily (or 'nothing but') a stunt.

The professional Tory-haters contend (Tweet) that a baby nearly died through government underfunding, and many tweeters believe the man done good to confront the heartless, opportunistic PM., whose 'electioneering' hospital visit was also a publicity stunt. They say the Tories have to be held to account for  “wrecking the NHS”, and conclude that Laura K is a Tory and that the BBC is a government mouthpiece.