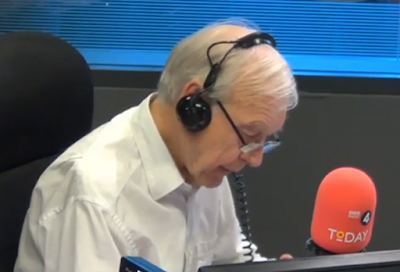 "For much of my career, I’ve felt rather like the junior butler trying to blag a seat at His Lordship’s dining table in Downton Abbey"

(John Humphrys, on being a working class, non-arts graduate at the BBC)

Just two short days after departing the Today programme, in mourning weeds, with tears in eyes, John Humphrys has seriously let rip at the BBC in (OMG) The Daily Mail...

Feedback will be appalled, and doubtless John's choice of publication and what he has to say there will only confirm to his many left-wing haters on Twitter that he's the right-wing fossil they've been so vociferously asserting he is over recent years.

Many of his criticism of the BBC will be very familiar, and we've made them ourselves...over many, many years. But it's always good to get it from the horse's mouth, even if the horse felt the need to bolt from the stable first.

It's a long piece, so I'll try to summarise it:

1. He says he's now free to speak and no longer has to "submit to the BBC Thought Police" his "subversive musings".

2. The BBC is "a tremendous and irreplaceable force for good" and "this country is the stronger for its existence". "Our democracy needs it" and he's "convinced that it occupies a special place in the nation's heart" and that "we would be poorer without it".

3. The BBC has a "great fear... of the politically correct brigade and the most fashionable pressure groups — usually from the liberal Left, the spiritual home of most bosses and staff".

4. BBC bosses didn't even try to disguise their horror at the result of the EU referendum. It wasn't what they expected or what they wanted. They saw it as "a disaster".

The Brexit crisis had exposed a fundamental flaw in the culture of the BBC. Its bosses, almost to a man and woman, could simply not grasp how anyone could have put a cross in the Leave box on the referendum ballot paper.

Here's a lengthier extract with a telling anecdote:

We note how much time the typical boss spends in meetings — usually with other bosses — and how little in the various news rooms. It’s true that they tend to appear on the mornings after, say, General Elections — offering a few nods and smiles and the odd encouraging remark to the poor bloody infantry who have been slaving away all night.

The morning of the EU Referendum was different. Leave had won — and this was not what the BBC had expected. Nor what it wanted.

No nods and smiles when the big bosses appeared. No attempt to pretend that this was anything other than a disaster.

Their expressions were as grim as the look on the face of a football supporter when his team’s star player misses the penalty that would have won them the cup.

5. The BBC has an "institutional liberal bias". The main reasons for this are (a) its recruitment process, which overwhelmingly hauls in middle-class, university-educated, often private school-educated arts graduates ("and it’s a racing certainty that there won’t be more than a handful of Tories among them") and (b) groupthink:


There is, I believe, a groupthink mentality, an implicit BBC attitude to what makes news. Decisions are influenced, if only subconsciously, by what the organisation has done in the past. So it can too often be willing to settle for the status quo, settling into the same lines of thought.

6. Because of that groupthink, immigration and euroscepticism became two important areas where the BBC "failed so badly to spot a change in the nation's mood".

7. He himself voted Remain in the EU referendum. He's voted for most political parties over the years (though not the far-Right or the far-Left) and considers himself "pitifully middle-of-the-road".

8. The BBC finds it "hard to resist" the temptation to engage in social engineering. It sometimes tries "to create society in its own image" and "places its powerful finger on one side of the scale of social justice":

Which is why I raised my eyebrows when the BBC announced it had created the new post of LGBT correspondent — and the man appointed said: ‘I’m looking forward to being the mouthpiece for some marginalised groups . . .’ It was the use of the word ‘mouthpiece’ that jarred. Obviously, the BBC must give a voice to minorities, but it must not act as anyone’s mouthpiece. That’s what lobbyists and public relations people do. To confuse the two is to undermine the job of a journalist.

9. More and more people at the BBC "conflate and, perhaps. confuse their own interests with those of the wider world...The logic seems to be that if they feel strongly about a given issue, the BBC should not only listen to them but modify its output to reflect their own world view." He cites the example of members of the BBC's LGBT group, including a business presenter, demanding on Twitter that a question on Question Time asking if it was morally inappropriate to teach five-year-olds about LGBT issues shouldn't have been allowed. It's not a good look for people at the BBC to engage in censorship.

10. The BBC's handling of the Carrie Gracie affair and his leaked off-air banter with Jon Sopel about it "made the Kremlin circa 1950 look sophisticated". He doesn't believe he did anything wrong.

I was disappointed by the BBC’s reaction. They might have made the point that my 50 years’ service at the BBC showed that to accuse me of misogyny on the basis of one bit of private banter was risible. Fat chance. Instead, they came up with the typically pompous comment: ‘This was an ill-advised off-air conversation which the presenter regrets.’ And a ‘source’ told the Guardian that ‘management are deeply unimpressed’.

And he's particularly angry at how then-PM presenter Eddie Mair - the real "boss" of PM - handled the story (or, as JH sees it, non-story), going on to complain:


Mair was not a team player. When he joined PM in 2003, it was a straightforward news-based programme. By the time he left, it had become — in my view — a vehicle for his ego.

11. Yes, he enjoys arguing and approaches people in power "with a pretty strong dose of scepticism", but he's come to realise that the "gladiator sport" style of interviewing is far from ideal. What does it actually achieve? "Too many interviewers (present company included)", he says, "are too often more concerned with making headlines than with helping the audience understand the issues at stake." He admits he got "a little heated, too heated" in the past, did "a lot of interrupting" and, to his "great shame", lost his temper at times, but "calmed down" over the years.