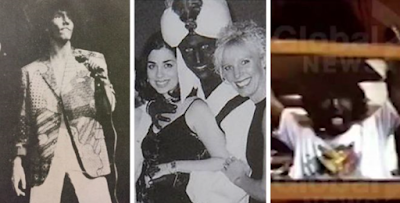 
In my half century of life I've never once put on 'brownface' or 'blackface' - unlike ultra-woke Justin Trudeau, Canada's Liberal PM, who's accidentally done it at least three times now.

Confession time, I did once -  albeit aged ten, and abetted by my teachers - put on 'goldface' to play the scary Ghost of Christmas Future in my primary school's production of 'Scrooge'.

I had a black cowl and a black cloak. I glided. I held both arms in front of me, like a sleepwalking Frankenstein's monster. I pointed. I was silent. I was ominous. And then I tripped over the end of Scrooge's bed.

I suspect Justin Trudeau ('a virtue-signal made flesh') is feeling even more embarrassed today than I did back in 1979, especially as he was a 29-year-old teacher when he last painted his face brown, just 18 short years ago.

Oh well, you live and learn. I doubt he'll do it again now.

Though you never know. Maybe, like Father Ted in that episode where he inadvertently keeps offending Craggy Island's Chinese community ('I hear you're a racist now, Father!), poor Justin will just have to accept the fact that he's fated to be the kind of man who accidentally ends up having 'blackface' on his face from time to time. Maybe it's a curse?

I did wonder what all the BBC's hyperactive Tweeters - from Jon Sopel to John Sweeney, from John Simpson to Hugh Sykes, from Katty Kay to Anthony Zurcher, etc - had to say about this. What fun they must be having mocking  and tut-tutting at the liberals' pin-up boy! But they haven't posted a single tweet about this. Not one. Fancy!

I bet if images emerge of The Donald in 'brownface' and 'blackface', even as a 10-year-old, they'll be tweeting about it till their fingers bleed - and beyond. 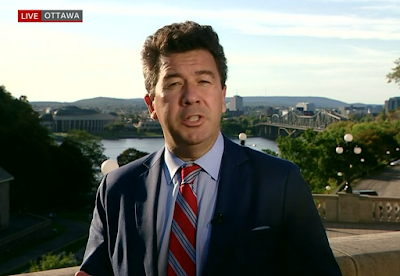 Anyhow, here (for your interest) is how Nick Bryant reported the story at 10:19 pm on last night's BBC One News at Ten:


Nick Bryant: In this age of celebrity politicians, Justin Trudeau is a politician who became a celebrity. Youthful, telegenic - a leader who seemed to embody the values of modern-day progressiveness, a model of political correctness. But this photo presents a very different picture, showing him wearing blackface make-up at a private-school gala in 2001. An Arabian Nights costume party where, as a 29-year-old teacher, he was dressed as a charater from Aladdin. His message today - "Forgive me, I've changed."


Justin Trudeau: Darkening your face, regardless of the circumstances, is always unacceptable because of the racist history of blackface. Should have understood that then, and I never should have done it.

More blackface photos have emerged, and a video has surfaced from the early '90s showing a young Justin Trudeau sticking his tongue out and making faces. All this in the midst of an election campaign in which Mr Trudeau had already been reeling from a corruption scandal. Blackface is now recognised as a racist caricature, and his opponents are piling in.


Jagmeet Singh, NDP leader: Any time we hear examples of brownface or blackfacing, it's making a mockery of someone for what they live, and what their lived experiences are. I think he needs to answer for it.

The young Prime Minister has always sought to portray Canada as one of the world's most successfully multicultural countries. Here, he greeted Syrian refugees at the airport. This damages his political brand. But in the capital, Ottawa, today, most people we spoke to were forgiving.


Vox Pop 1 (elderly Sikh man): It is nothing, because he was very young at the time. Vox Pop 2 (elderly white lady): And it was Canada, it's not the US, we don't have the same history here that they have in the US. Nick Bryant to Vox Pop 3: Do you find it offensive? Vox Pop 3 (young Native Amercian lady): I do.

He's positioned himself as a liberal counterpoint to Donald Trump, but his golden boy image has been tarnished. Nick Bryant, BBC News, Ottawa.

Nick Bryant (continuing): Now, Justin Trudeau couldn't even remember today how many times he had worn blackface make-up, which raises the possibility, of course, that more damaging pictures may emerge. Now, he thinks he can weather this political storm, and we will find out this time next month, when Canada goes to the polls.