Margaret Atwood’s dystopian cloak-and-bonnet tale and the BBC’s Rise of the Nazis. A pair of allegories-with-a-message. 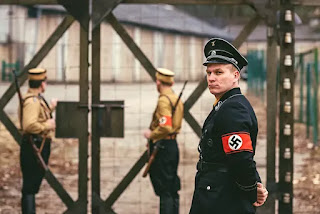 Reviewers were quick to recognise that these programmes bore comparisons between present-day reality and dramatised fiction. Craig has already cited James Delingpole who points out that within the programme (Nazis) former Cambridge historian Professor Sir Richard Evans laid it on with a trowel; Trump =  Hitler.

There are indeed parallels and messages, Jim, but not as we know it. Not as you know it. Y’all took away ’the wrong message’.

I started to pen a review of  “the Nazis” but it got filed under ‘pending’. (‘Pendings' are beginning to stack up). Objections to Ash Sarkar’s inclusion in this programme have already been well documented, so I won’t waste time on that.

The parallels I saw were the opposite of the good Professor’s. The real parallel is between the rise of antisemitism and the Corbyn-led Labour Party.

But no, the intelligentsia has pronounced that the parallels were between Boris Johnson, President Trump and populism and, somehow, fascism.

Allison Pearson has written about a similarly topsy turvy ‘take-away’ from The Handmaid’s Tail.  Sorry, tale. 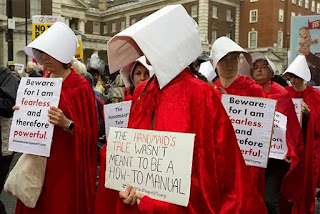 The Republic of Gilead is not Trump’s America. The parallel is with a certain religion. Praise be!

Labels: 'The Rise of the Nazis', Allison Pearson, Margaret Atwood, The Handmaid's Tale