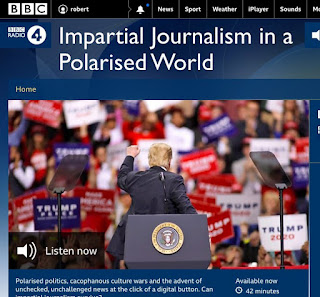 I intended to listen to James Harding’s  “Impartial Journalism in a Polarised World’ on Radio 4 this morning at 9am, and for once I remembered to do so - (not that it really matters when there’s iPlayer) but listening to an ear-marked programme in real-time is always best. Here’s the blurb:

“Polarised politics, cacophanous culture wars and the advent of unchecked, unchallenged news at the click of a button. Can impartial journalism win out in a world of alternative facts and the re-tweet echo chamber of Twitter? If it doesn't, what becomes of democracy?

When radio arrived, it gave politicians the means of mass propaganda. Television brought us the politics of the soundbite and the twenty-four hour news cycle. But the digital age - unmediated opinion, unchecked sources - has put old-fashioned, impartial news itself under the spotlight. Are we - the BBC and others - any longer believed? Are we trusted? And what happens when we aren't? Do democracy and digital sit comfortably together or is one currently winning at the expense of the other?

James Harding was editor of The Times and then took the helm at BBC News. After 2016, the Brexit referendum and the election of Donald Trump, he started to think that a different approach was needed, focused on slow news and opening up journalism. He set up Tortoise. In this noisy discussion, James and other journalists grapple with all of these matters, and attempt to navigate a digital future without losing our democratic past.

I enjoyed listening but I didn’t think any ground-breaking revelations were made.

Helen Lewis talks at break-neck speed, doesn’t she? She has an impressive ‘radio voice’ though. She made her mark as one of the regular news reviewers alongside Nick Watt on the BBC’s ‘Sunday Politics’ in its Andrew Neill era. Ms Lewis obligingly toned down her political bias a little then, but now, no longer constrained by the BBC remit, she’s an out-and-proud leftie and for all her bright, articulate and knowledgeable manner she can't conceal the limitations of bubble-dwelling. Maybe she can’t see it herself, but why should she?

Also present were Mark Mardell and Robert Peston.  I want to like Robert Peston, but I can’t. His delivery is tailored to irritate us. You can almost accept the erratic pacing, but it’s that “That” of his that bothers me. It goes something like: “eh-ththutt”; a retch. Perhaps he’s overcoming a stammer. (?)

Where were we? Oh yes, Julia Hartley-Brewer, another hyper-fast-talker. She brought a little counterbalance to the consensus, but I felt she was holding back.

The other participant was the chap from the edgy media outlet, Vice UK,  Gavin Haynes.   He broke a tacit BBC taboo by bringing Paul Joseph Watson, Carl Benjamin and ‘Count Dankula' into the mix. But for Gavin Haynes, I don’t believe anyone would have mentioned those hitherto unmentionable characters by name, let alone admitted that they might bear some relevance to ’journalism’, at any rate to the ‘polarised world’ compartment of it. (Apparently, Benjamin calls himself a social commentator, not a journalist.)

The discussion covered (pure) impartiality versus ‘due impartiality’ - ITBB has been over this many times, but briefly it (the ‘due’ bit) necessitates making a value judgement somewhere along the line, which Robert Peston called “evaluating”, meaning being sensible enough not to give equal weight to an ‘expert’ and a ‘nutter”. The BBC must be trusted to decide which is which. This leads us gently towards the knotty question of ‘no-platforming’.

Confirmation bias and the echo-chamber phenomenon were alluded to. “People rarely come into contact with arguments they disagree with,” said someone and it’s hard to argue with that. Mingling with the like-minded is reassuring, and comfort zones are just that. Places where you feel comfortable. Stumbling into a hostile environment is exhausting, especially when their default ‘truth’ hangs on a very shoogly peg. People on one side will say  “but you won’t even listen to the other side of the argument” which is precisely what the opposite side is thinking about them. (As Helen Lewis and Julia Hartley-Brewer demonstrate midway through the programme)

The entire panel, including Julia H-B, was dismissive of Tommy Robinson following a short audio clip of him talking about the media’s lack of support of him as “a political prisoner“. They also played clips from that infamously curtailed interview between Andrew Neil and Ben Shapiro, and Emily Maitlis’s interview with Steve Bannon.  ‘Stranded’ and taken out of context, I thought these examples  - particularly the unrepresentative Ben Shapiro one  - were unhelpful.

Helen Lewis described Tommy Robinson as having made ‘a whole career out of saying he’d been silenced’ and Mark Mardell called him “a peripheral figure with very little support”.

Since much of the media’s bias and a considerable amount of actual news in this polarised world of ours concerns incidents and issues emanating from ‘Islam’, it is significant that the word itself wasn’t uttered at all.  This alone suggests that tiptoeing around this issue indicates that ‘due impartiality’ is as far away from achievability now as it ever was.
Posted by sue at 22:10