I might have mentioned this before, but I’m not on Twitter. Life’s too short. However, I do get information from Twitter  - it reaches the parts (information-wise) that other information-providers don’t reach.
A valuable source for anyone following Britain’s descent into pre-war 1930s Germany is the lively Twitter timeline of Sussex Friends of Israel; it does what it says on the tin.

What’s it like for residents of Brighton and Hove during the Labour Party conference? What if you happen to be a Zionist, or simply Jewish, and a furious mob of antisemitic zealots descends at your back door with their “Free Palestine” T-shirts and starts setting up their vile, incendiary fringe-events and stalls.

No wonder the Sussex friends of Israel is a-buzzing.

I have to say that I watched quite a bit of the Labour Party Conference on the Parliament channel. Think of it as part ‘rubber-necking’ (as in something horrifying that you can’t take your eyes off) and part ‘better keep an eye on it” as you might with, say, a lit candle or a headache after a concussion. You know, it might turn out nasty.

Sussex Friends of Israel Twitter feed provided me with concrete evidence of some of the things I saw with my very own incredulous eyes and wanted to see again just to make sure they were ‘real’. I’m not talking about the sea of Palestinian flags that Elder of Ziyon featured the other day. Nor about the wild applause speakers received for announcing that they were ‘first-time’ delegates and ‘first-time’ speakers - like Madonna’s virgin, a bit “touched”  (in the head) for the very first time. 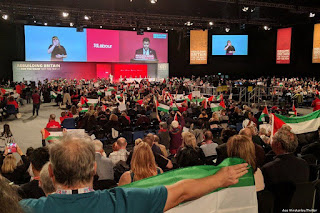 No, I’m not even talking about the sub-standard quality of the speeches, the venomous anti-Tory rhetoric, or the bitter, envious negativity that tainted the whole caboodle, let alone the farcical bungled confusion over their ‘crucial’ vote on composite 13 -  where a show of hands narrowly rejected a motion that would have committed the Labour Party to campaign for “Remain”, (though some ‘Remainers’ dispute the outcome)

No, what I needed to see again with my own eyes were two speeches, which I suppose came loosely under the “Foreign Affairs” umbrella. They tackled ‘Palestine’. The first abomination consisted of an  illogical tirade from a female delegate called Ali Brownlie Bojang (look her up - troubling - if she is who she seems to be)
This person recounted a ‘historic’ tale about Jewish armies driving hundreds of thousands of Palestinians out of their homes: ‘they left with nothing because they thought they were coming back in a few days’. After delivering more crowd-pleasing fantasies she concluded with a rabble-rousing but strangely tremulous cry: “Free Palestine!” Unfortunately, the video only captured the finale, which saves you, dear reader, from the bit-by-bit deconstruction I might otherwise have had to include.

The F***ING state of this. This is the floor of the UK's official party of opposition! pic.twitter.com/DQKG64urt1
— SussexFriendsofIsrael (@SussexFriends) September 23, 2019


The second speech was even more of a farce. I even felt a pang of sympathy for the poor person who lost her smart-phone script mid-way through her diatribe. What was particularly farcical about this episode was that she received a standing ovation just for announcing “My name is Vanessa Stilwell and I am from Jewish Voice for Labour and I have never seen any antisemitism in the Labour Party”. Imagine, those credentials are even more virtuous than being a virgin speaker!

Thereafter she squandered the bulk of her precious two-minutes of hate-slot on searching and eventually failing to find page two of a tale about hundreds of thousands of peaceful unarmed Palestinians being shot in the lower limbs - we’ll never know the outcome of this tragic tale of unprovoked Israeli brutality.  Even the embarrassing hiatus of panicky but ultimately ineffectual scrolling through her phone and saying “oh dear - sorry “ didn’t dent the enthusiasm of the whipped-up mob. I found a video of the whole thing embedded within some godforsaken Twitter thread but I can’t quite find it again - so in a way, I know how she must have felt - bloody computers and smartphones and www.! Ugh!

Did the BBC report any of this? No. They were totally uninterested in that aspect of it. Even the Politics Live episode in which Sarah Baxter admitted she’d been to the conference didn’t bring the subject up at all, until  this exchange:

THIS 👇👇@CharlesWalkerMP delivers his damning verdict on the chances of @jeremycorbyn becoming PM:

“The HoC will never put @jeremycorbyn into No. 10. Never, ever. It will never happen because he has a fundamental problem with parts of our community that happen to be Jewish” pic.twitter.com/FBWvhPrWco
— SussexFriendsofIsrael (@SussexFriends) September 25, 2019


This ‘tribal’ remark has enraged Sussex Friends. I’d always thought there was some hope for Lisa Nandy, but now I see her, just like Labour’s Laura Pidcock, as so engrossed in the trials and tribulations within the confines of her particular constituency that she can’t see beyond it. Maybe all an MP needs to be is a single-minded advocate for their own constituents, but if they hope to rise within their party they need to be aware of the bigger picture too. This unimaginative attitude is especially puzzling from Nandy as she keeps saying ‘we must protect our minorities’.

From a profound matter that the BBC willfully ignores, to something relatively superficial that the BBC is amplifying to an absurd degree. They have made the most ridiculous and sensationalised pantomime out of this ‘language’ business.

I watched the Parliament channel nearly all day yesterday. The rhetoric was acrimonious, spiteful and full of bile.  Indeed most of the speeches from the opposition benches were negative, repetitive and contained no constructive ideas.


The BBC headlines were devoted to “language”, in particular, the word “surrender” as in “the surrender bill”. Of course, we all know what Boris meant - that preventing Britain from walking away from negotiations if faced only with an unsatisfactory deal is tantamount to surrender. It leaves Remain as the only option, which is the whole idea of the bill. No-one made such a fuss over the French-as-a-nation being defamed with the facetious label ‘cheese-eating surrender monkeys.’ Or any fuss at all. And incidentally, dragging Brendan Cox to tell us what Jo would have thought, as they did on Radio 4 this morning was a pathetic idea; bad taste and irrelevant.

The Greta-like, childish focus on Boris saying ‘sorry’ was another example of the media’s infantilising influence on politics and current affairs. There is a difference between saying “Sorry for causing offence” rather than apologising for the actual offence, as is often pointed out, and making Boris say ‘sorry’ forces him to make the kind of non-apology that attracts equal disdain.

As it is, he had no alternative but to respect and abide by the decision arrived at by an institution considered to be the ultimate legal arbitrator, but even if one thinks he's morally obliged to apologise for the ‘proroguing’, which was retrospectively judged to be invalid - nullified and voided, does it follow that he is also required or to say sorry for making the case in the first place? I’m only asking.
Actually, he seemed to me quite magnanimous and gracious in defeat, unlike those Labour MPs. If the BBC is going to make such a massive fuss over ‘language’ what about the spiteful, personal and vindictive bile that comes from the insufferable pigeon-like SNP bore, Blackford?

You have to ask. Why does the BBC behave in this increasingly tabloidy and infantilised way? I used to be ambivalent about abolishing the BBC because of the good stuff that was in there. If the Labour Party can abolish Eton, do away with borders and dispense altogether with the letter ’t’ I’m coming round to thinking that abolishing the BBC is the only way.