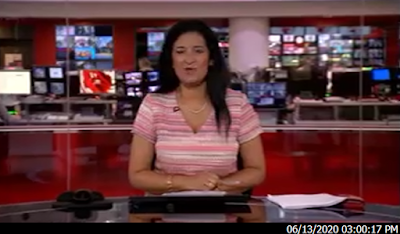 Unusually for me, I've suddenly started intervening on Twitter. I thought I'd share this conversation with you as I think it's very telling. I found the 'offending words' via TV Eyes.

Alastair Stewart OBE: "The controversial statue of Winston Churchill". As described in a BBC headline...
Adrian Hilton: I'm not disbelieving of Alastair Stewart, but does anyone have a screengrab of this?
Alastair Stewart OBE: It was BBC Breaking so I am not sure you can get that on 'catch-up'. It would take an odd soul to sit there with an iPhone...you'll just have to take my word for it, I guess.
Adrian Hilton: As I said, I'm happy to take your word for it, because I know you to be an honourable man. My appeal was simply for visual evidence, so I may illustrate.
Craig Byers: If anyone can find video footage, it was on the BBC News Channel at 3pm: "This is BBC News with the latest headlines for viewers in the UK and around the world. I'm Geeta Guru-Murthy. Groups including right-wing activists have clashed with police in central London as they gather near Parliament Square and the controversial statue of Sir Winston Churchill".
Adrian Hilton: I'm slightly irritated by this (h/t Alastair Stewart OBE). If a tiny group of protesters object to something, and the BBC magnifies or affirms their grievance by rendering it 'controversial', then BBC News must call itself 'controversial'. There is no controversy for the vast majority.