I’m going to take advantage of the current paucity of comments to return to my niche topic. You might have noticed that ever since the rest of the non-leftist media/blogosphere has (belatedly) recognised how agenda-led the BBC is, I’ve been deviating more and more from the blog’s core raison d’etre. However,  many of the things that have been bothering me are ultimately traceable back to the BBC. Track'n'trace.

First and foremost, the entire content of the current page of links on the EoZ website is, as a whole, more disturbing than ever. Believe me, I thought that even before I saw this comment:

“Today the thread was more insane and chilling than usual and the threads here usually tend to be quite insane. It managed to surprise and alarm me.”

Of course, “Elder of Zyion” is just about the most prolific the blogger on the block, and true to form, that long ‘linkdump’ article has already been superseded by the next one.

I’m guessing that my interest in this issue is not every reader's cup of tea, but it’s (half) my party and I’ll cry if I want to. For brevity’s sake, I’ll try to stick to the ‘special bits’ like they did when someone was evicted on Big Brother.

Because the issues covered on that site are so huge, I tend to concentrate on UK focused material, but it’s a US-based site and I am interested in developments ‘over there’ too.

The first shocker concerns a man named James Zogby, then president of the Arab American Institute. I haven’t researched it, but I assume it’s a bit like CAABU.

The headline on EoZ is:
Historic Video Unearthed: The Arab American Plan to Defeat America’s Jews.

The link takes you to “Americans for Peace and Tolerance.” (me neither) The word “historic’ threw me at first because the video in question is only about 30 years old. How historic does that sound to you? Not very, as far as history is concerned. The video itself features an interview broadcast on Jordanian TV circa 1998; the article's strapline is as follows:

The Arab American Institute outlined a plan to undermine pro-Israel support in America — and it worked.

It seems that Zogby went to Jordan to garner support for his plan to undermine the Jewish community in America. He would do so by harnessing the Left’s natural opposition to “oppression” by promoting the ‘Arab’ interpretation of  Israel’s treatment of Palestinians.

“Zogby saw the power of framing Israelis as “white oppressors” of innocent, indigenous, darker-skinned Palestinians. And he saw the possibilities of mobilizing left-leaning ethnic, racial, and religious groups against “Israeli oppression.”
The prescient Zogby understood how the Jewish left could easily become the willing lynchpin of his strategy.”

One only needs to look at the current situation to see how effective this was and is to this day.

If you have the stomach to watch it - I’m afraid I didn’t quite make it all the way to the bitter end, I would be very pleased to hear if Zogby explained what the ultimate goal of all this anti-Israel galvanising actually was?
*********
The next item on the link-list is by Melanie Phillips. The Barbarians Inside the Gates
You’ve got to read it.

Now, as we’ve seen over the past couple of weeks, white society is being vilified by anti-white racists who viciously smear as a bigot anyone who objects. Western culture is being stripped of its historical memory, with the removal by violence or under intimidation of statues commemorating those whose behaviour in a different era doesn’t conform to the enforced orthodoxy of today.

This article really is one of those ‘must-reads’

**********
Next on the list. Celebrities mistakenly or misguidedly posting approving tweets and comments about Louis Farrakhan’s oh so powerful speech. I admit I haven’t heard of a single one of these Hollywood heroines but their abject stupidity is less surprising than the attempts by various antisemites to silence anyone who criticises Farrakhan. (Chelsea Handler? What? Who? Why?)

This next item is very like the one above. It features something that many of us have seen already.
When Rosie met Jim.

"The image went viral on Facebook and Twitter garnering millions of views and hundreds of thousands of likes and shares. An apparent beacon of hope against racism." 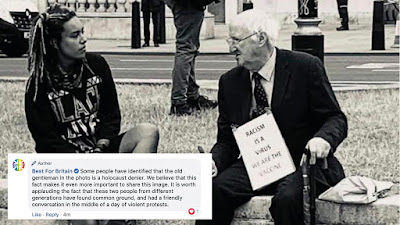 It’s about BLM yet again, and the revelation that the cuddly grandpa with the placard “Racism is a virus - we are the vaccine” is really a Holocaust-denying racist named Jim Curran.

"His name is Jim Curran, an Irish nationalist and regular attendee at meetings of the Far Right/Left crossover group, Keep Talking. This extremist organisation was recently exposed by the CST and Hope Not Hate. They detailed how extremists from across the political spectrum (ex-Labour members Elleanne Green and Peter Gregson, Gill Kaffash and Tony Gratrex formerly of the Palestine Solidarity Campaign and convicted Holocaust Denier Alison Chabloz and former KKK Grand Wizard David Duke compatriot, James Thring) met to obsess over antisemitic conspiracy theories: from the ‘Jews did 9/11’ to outright Holocaust denial."

(to namedrop but a few.) As if the truth isn’t awkward enough, the really frightening thing is the way the “anti-racists” refuse to accept the truth. Undaunted, and in the name of anti-racism, they defiantly double down, spouting antisemitic / anti-Israel rhetoric as if to bolster their virtue.

" Despite the fact that concerns about Mr Curran were now flowing around social media, a series of prominent media and social justice organisations were more interesting in promoting the romantic narrative that than the messy truth. The Labour group, Momentum, posted the picture on their Facebook page with the caption “more of this please” and a leading figure in Amnesty UK shared it."

There’s more, but I think that’s quite enough for one day.

Join us on Resistance TV
Watch live on Youtube or Facebook#FreeSpeech pic.twitter.com/KaHLSTISVa
— The Festival of Resistance (@TheResistFest1) June 13, 2020