I remember talking about ‘the swing of the political pendulum’ in 2009. Then there are Craig’s analyses of Cardiff uni’s insanely biased study of the BBC’s bias.
Richard Sambrook! What a choice!

Not to mention over a decade of hollow screeds from us about the BBC’s left-wing, anti-Israel, anti-anti-anti……. you know.

Yesterday I was going to write about the pissing man. Two weeks in custody!!
The other day I started something about Piers Morgan’s atrocious bullying of a US lawyer named Earl Gray. “That was the worst interview I’ve ever heard” declared Piers afterwards. Yep. It certainly was, but not in the way you meant.

In the new world of opposites, where all meanings are reversed I set off on a stream-of-consciousness post about BLM:


"The slogan “Black Lives Matter” is such a platitudinous statement of the bleeding obvious because of course they matter! duh! As do lives of all shades and sizes.
As Andrew Doyle said "who, in this day and age, could disagree?"
Its very obviousness carries a built-in implication - namely, only black lives matter. So not “inclusive”, then, in the woke sense.

As a slogan, it’s pointedly not ‘all lives’ and you can get yourself into real trouble for suggesting that it ought to be. So no, just the one skin-shade. Not even ‘as much as everyone else’s lives’,  and -  conspicuous by its absence - not BAME lives. Just the Black ones.

Black Power! The Nation of Islam! The most racist outfit imaginable. Raised fists!.
Look at the new language. These days anti-racism IS racism so we must get used to opposites being the new normal. Someone has decided that anguage is officially allowed to mean the opposite of the old meaning. Consistency is the key. Oh, and inconsistency.
Example.
28 injuries to policepersons occur during a peaceful incident.
Another incident results in injuries to 2 police officers.
Which was the more violent incident? Obvious!
Once you get used to it it’s fine.


How long-winded that was - and that was the edited version of the beginning of a beginning.  I scrapped it.


Then I saw this on YouTube. So I just thought Bollox. Why bother? Let Mahyar and Konstantin take the floor.


For some reason, YouTube (Or maybe just this video (?) ) seems to be (temporarily I hope) out of order with Blogger, so here's a grab of the image. (You can access the video (direct) via YouTube) 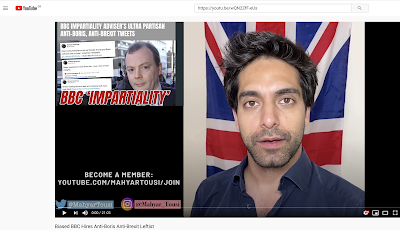 If I can, I'll try again later. See above.
(Note: I'm a swearier person than Craig)