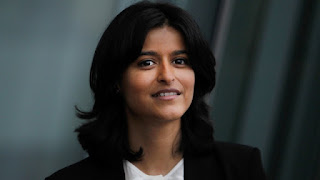 I understand there’s a Twitter storm about this appointment.

I think we need to talk about the current cultural revolution. How massive is it? Before Brexit, we were made to understand that Brexiteers were just a small minority. (of racists and xenophobes) Same thing with Conservative voters. We were made to believe - to actually fear - that Jeremy Corbyn was about to move into number ten.

Now that everything is so woke - so BLM - that non-lefties are cowering in terror. Dreading Joe Biden becoming POTUS, Sir Keir Starmer becoming PM and BLM imposing an entire cultural revolution upon the whole wide world.

I understand that the UK black community, (if there is such a thing, which I doubt) makes up a mere 6% of the UK population. Is that correct?

Here in the deep south-west of England, there’s an undeniably monocultural population. On second thoughts, it’s more mono-ethnic than monocultural, because there are a huge number of hippies and lefties to counterbalance the Conservatives, stick-in-the-muds and conventional ‘poor people’, but they’re mainly white, or sort of pinky- grey. All privileged, of course.

Yet, lo and behold, the local press featured a splash front-page report about a BLM protest in Truro!

No place is safe from progressives and BLM protesters, and most of them are supremely ignorant about the wellspring of ideas from which these movements have sprung/ evolved/ emerged.

So I don’t know what to think. As more and more people engage in polarised politics, is there anywhere to hide? Will there be a day of reckoning? - a surprise? - a backlash? - or is The Long March Through the Institutions due, at any moment, to arrive at a destination near you?

Underground bunkers were popular when the nuclear scare was at a peak. Should we be digging again?
Posted by sue at 15:24