Questions and answers. The 'other' racism

Dawn French’s comedic response to an “are you or are you not” question was an emphatic “Not!” which was very funny. If the BBC were to be asked, under oath, if it is an ‘ideologically’ anti-racist organisation or not, I’m afraid the answer would also have to be ‘not’.

Can we take it that racism is generally considered to be bad’? That’s a very clumsy statement but it will do for now. If we can take it that anti-racism is ‘good’, do we believe that the BBC, as an institution, includes or excludes ‘hatred of Jews’ in its interpretation of racism? Jeremy Corbyn uses the phrase “antisemitism-and-all forms-of-racism” therefore, impliedly, he sees it as a separate and possibly lesser, ‘ism’.

Since Islam is firmly established in multicultural-Britain as just one of a number of ‘diverse’ religions, and the racist element within it is studiously ignored,  I’m asking whether overt antisemitism (or antisemitism disguised as anti-Zionism) is acceptable or just an opinion and therefore sort of okay?

We are often told that being (ideologically) ‘anti-Israel’ is a legitimate position. What does that mean? A generous interpretation could be, say, stopping short of disputing Israel’s ‘right to exist’, yet critical of most retaliatory or self-defensive acts by Israel. (Because of support for the Palestinian cause)

Is anti-Israel activism a prejudice, though? Israel-bashers argue that hatred of Israel is a logical response to a nasty, totalitarian regime, and given the way it has been portrayed by the mainstream media for the last seven decades, incurious people are bound to see it that way. A circular self-propagating mash-up in which the snake eats its own tail.

I don’t buy the idea that being ‘anti-Israel’ is “just an opinion” and a mere matter of ‘picking-your- side’ between two equally innocuous teams and where your choice might be random, traditional or you just like the colours of their strip. Why not?  Simply because when one takes an interest in proper, pre-1967 history, unlike the lazy and historically illiterate BBC, the opposing sides are neither equal nor innocuous.  Let’s simplify it and reduce it to choosing between goodies and baddies.

If the BBC were truly ideologically opposed to ‘pure’ racism, would it really tolerate, let alone revere, so many fundamentally antisemitic (generally hard left) contributors and pundits? 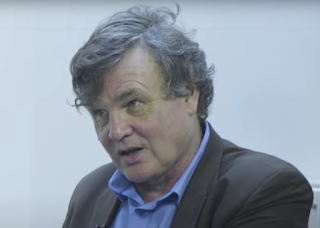 Peter Oborne’s relationship with the BBC is a case in point.  There is a relationship because, for one thing, Oborne is a regular presenter of The Westminster Hour. A responsible position, I’d say, suited to someone respected by the Beeb. But Oborne makes little secret of his prejudice. We can easily bracket Oborne with a particular breed of ex-BBC staffer. The ones that morph into full-on anti-Israel campaigners the moment they’re unleashed from the constraints of impartiality under conditions in the BBC’s charter. People such as Tim Llewellyn and Alan Hart deceased.

I’ve tried to apply due diligence in my exploration of the BBC’s indulgent blind-eyed approach to Peter Oborne’s racism as I don’t want to appear indolent, but I have to admit that I don’t start with a clean slate. I find him strange. His authoritative, self-assured manner somehow lends incongruity to his pro-Islam fixation, even though that particular brand of Arabist, anti-Jew sentiment typically sits comfortably with such characteristics. This cosy, mutually ego-massaging tete a tete with Owen Jones seems especially incongruous! Here the pair are defending Islam and calling Jeremy Corbyn a breath of fresh air. 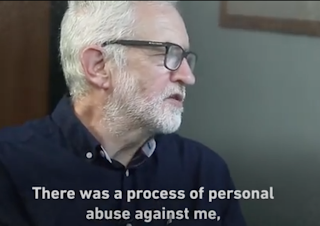 A kind of debriefing, post-defeat interview with Jeremy Corbyn has featured on various websites recently, including the Campaign Against Antisemitism,

It was conducted by a man named David Hearst with Oborne looking on and occasionally chipping in. Hearst is a man with whom Arabist / antisemitic credentials not only sit comfortably but invite themselves in, take their boots off and make themselves at home. The Corbyn interview can be seen on the anti-Israel ‘Middle East Eye’ website

The most informative critique of this bizarre interview is by Mark Gardner in the Jewish Chronicle:
“Out of office, Corbyn is creating an antisemitic myth to explain his defeat."

Hearst and Corbyn have more than Mr Milne in common. They were, for example, amongst the leading British cheerleaders for Sheikh Ra’ed Salah, who infamously preached a blood libel in Jerusalem.

The themes of Mr Corbyn’s interview will repeat in far-left propaganda for years to come, from university academics in sociology departments throughout the country, to street demonstrations and the mad, sad and obsessive losers who pollute social media.

The narrative is simple, yet dangerous. Mr Corbyn was a singularly good man who wanted to save people from the harm that is done to them. He wanted to tackle endemic poverty, end racism, stop wars and save the planet. Because of this, the establishment ganged up on him, bullying him with so much slander that his defeat was inevitable. The general public was hoodwinked by evil forces into rejecting their saviour and antisemitism was one of the primary lies wielded against him, which is why this is very dangerous for Jews.

Coincidentally, this topic has just appeared on Harry’s Place. Snap! 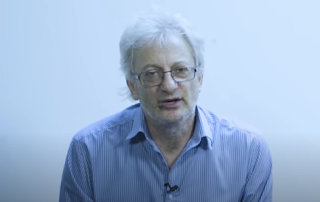 The evolving pattern of Peter Oborne’s causes and crusades is chequered. Here he is in May 2019 in the Daily Mail, criticising Nigel Farage and praising the Beeb. Nigel Farage's blustering about BBC 'bias' exposed his gaping flaws.

In June the BBC gives him another ‘Week in Westminster’ slot.

In October 2019 he’s on Channel 4 talking to Krishnan Guru-Murthy about “Smears, Lies and Fake news.” (This time criticising the BBC.)
Back in 2009, however, he was praising the BBC and passionately defending certain reporters against accusations of bias. Naturally, Oborne would jump to the BBC’s defence as the subject was an accusation of antisemitism.

“Some journalists we spoke to had been accused of antisemitism, and felt inevitably it had done some damage to their careers. Others, like the BBC’s Orla Guerin, against whom this very serious and damaging charge has repeatedly been made by the Israeli government, wouldn’t even talk to us off the record. It is easy enough to see why. Guerin is a brave, honest and compassionate reporter. Yet the Israeli government has repeatedly complained to the BBC that Guerin is “antisemitic” and showed “total identification with the goals and methods of Palestinian terror groups.”

Read the full text to experience the bitter taste of Oborne’s account of the BBC’s 'pro-Israel' bias. I give you the concluding paragraphs:

“Not only has Bowen’s hard-won reputation been sullied, but the BBC’s international status as the best source of trustworthy news in the world has been gratuitously — if unintentionally — undermined.”

[...]The Trust’s ruling was met with dismay in BBC newsrooms. A former BBC News editor, Charlie Beckett, told us “the BBC investigated Jeremy Bowen because they were under such extraordinary pressure... it struck a chill through the actual BBC newsroom because it signaled to them that they were under assault.

No wonder Peter Oborne approved of Jeremy Corbyn’s “the EHRC is all part of the government machine” line of defence. Sadly, it’s impossible to make progress when faced with a brick wall of an argument.

The most egregious example of an overtly racist anti-Israel polemic was a Channel 4’s  2009 Dispatches titled “Inside Britain’s Israel lobby. ” It was so badly produced and poorly researched that I suspect Oborne would be ashamed of its superficiality, should he be held to account for it now. But like Baroness Chakrabarti, he isn’t likely to admit that the work was shoddy, and retrospectively, something of an embarrassment.

If one were ever in a position to put the original question to the BBC, “Fess up! Are you an anti-racist organisation or not?” I’m afraid the honest answer would have to be a very firm ‘Not’.