No room for antisemitism in the Labour Party etc.... 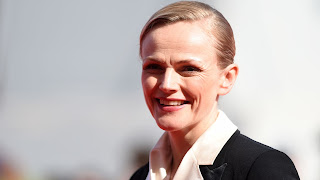 In 2016 we wrote about Maxine Peake, when she played the feisty heroine in “Three Girls”

“I can’t imagine hard leftie, pro-Palestinian Maxine Peake playing anything other than a passionate Social Justice Warrior. It will probably be all about the struggle against those heartless authorities who wouldn’t listen. Not about the grooming gangs with a warped attitude to females.”

Peake has also played a feisty character in “Shameless” and a feisty barrister in Silks and she is a real-life feisty agitator in that hypocritical, “literally a communist” (and probably well-remunerated thank you very much) feisty, actressy, opinionated way that is prevalent amongst actors whose careers the BBC disproportionately promotes. Unlike, say, Laurence wrongthink Fox, whose career has plummeted. (apparently)

Several references to Peake in the Spectator have greeted the connected news of Rebecca “Wrong-Daily’s” sacking (for retweeting Peake’s innuendo-laden remark that blames the IDF for putting that nasty ‘restraint technique’ into the innocent little heads of the US police) by declaring that they’ve never heard of Maxine Peake or that she’s a rotten actress.

I beg to disagree with such a mean spirited sidetrack.  I’d say she’s as good an actress as any of the other hard-left, opinionated Corbynista actresses that abound in “BBC drama” circles, and perhaps better than some. However, her political opinions certainly don’t do much for her image, and by association, certainly don’t do much towards redressing the BBC’s reputation as a lefty echo-chamber.

In which not only does Maxine Peake blame the death of the George Floyd on Israel, but the Independent sees fit to tell readers that this might indeed be the case. https://t.co/0tsDmqpGY8
— Nick Timothy (@NJ_Timothy) June 25, 2020

I jumped to the conclusion that Starmer had been looking for an opportunity to sack Long-Bailey, and I think he has taken advantage of that ill-judged tweet rather prematurely. It might come back to bite him on the bum, because, unfortunately, the argument that there was nothing actually “untruthful” in Peake’s accusation in the Independent article will gain traction, simply because the elasticity within left-wing antisemitism stretches in a wider and more complex and convoluted manner than (the typically superficial) public opinion can cope with.

It doesn’t matter if the allegation that the  IDF ‘trained’ George Floyd’s killer has been debunked. It doesn’t matter if the only link between the IDF and US cops was that “100 officers attended a conference hosted by the Israeli consulate eight years ago” or that it was for “a seminar about counter-terrorism”. No-one who’s got the bit between their teeth cares one jot about such a trivial discrepancy. The current antisemitism within the BLM movement and within the left-wing establishment is so ingrained I’m increasingly pessimistic about the future.

I’ll just assume Starmer doesn’t think much of Long-Bailey, (and I don’t blame him) but if he claims sacking her was done to demonstrate his virtuous determination to rid the Labour Party of antisemitism, I simply don’t believe him.

“…… the bigger the big lie is, the more believable it becomes. So of course rioters in Los Angeles smash Jewish stores and spray ‘Free Palestine’ on a synagogue in the name of George Floyd. Of course Twitter seethes with ignorant and malicious claims that Israel trains American police in how to kill black people. The radical left have been teaching hatred of Jews and Israel for decades, and the mainstream left has pandered to those groups and their obsessions.”