The other day this popped into my inbox.

Abdul Bari Atwan: “If you support the Palestinian resistance, you do not consider Bin Laden’s attacks terrorism”Abdul Bari Atwan, a London-based journalist and editor of Al Quds Al Arabi, told Egypt’s ON TV, when asked if Bin Laden was a terrorist, that:“If you support the Palestinian resistance, you do not consider [Bin Laden's attacks] terrorism. But if you are with America, Europe, and Israel, you do consider it terrorism. It depends on your definition of terrorism … Whoever fights America and its enterprise in the region, and whoever fights Israel and the American occupation, is not considered a terrorist by me.”
Atwan is a regular contributor to BBC Dateline and has on written for The Guardian on a number of occasions.In 2007, he told Lebanese television that, “If the Iranian missiles strike Israel – by Allah, I will go to Trafalgar Square, and dance with delight if the Iranian missiles strike Israel.”Atwan’s expressed views depend upon his audience. Other Arab journalists have noted Atwan’s duplicity: Munir Al-Mawari, writing in the Kuwaiti newspaper Al-Siyassa, stated that:“The Abd Al-Bari Atwan [appearing] on CNN is completely different from the Abd Al-Bari Atwan on the Al-Jazeera network or in his Al-Quds Al-Arabi daily. On CNN, Atwan speaks solemnly and with total composure, presenting rational and balanced views. This is in complete contrast with his fuming appearances on Al-Jazeera and in Al-Quds Al-Arabi“.In 2008, Atwan defended the terrorist attack on a school in Jerusalem, in which eight students were killed.  Atwan claimed the attack was justified because the school was responsible for “hatching Israeli extremists and fundamentalists.”

That’s his view, and he’s sticking to it. Well, that’s not entirely true. It all depends on who he’s talking to. I mean we all modulate our conversation according to who’s listening; we all have a telephone voice as well as the slovenly one for use within the family. But with Bari, his voices are designed to placate the audience, and when he’s on the BBC, obviously he ain’t gonna queer his pitch by bragging about his admiration for Osama Bin Laden.

His “dancing with delight” utterance, on the other hand, has an omnipresent notoriety that almost defines the image of the man himself, but it’s evidently no handicap when it comes to invitations to appear on Dateline. Not that anyone’s particular views need necessarily deprive them of the oxygen of the airwaves. The case for the defence might even consider it to their advantage to have the views of the opposition set out clearly, in all their indefensible glory.

However, the BBC generally doesn’t bother much with the case for the defence in regard to this particular issue. Atwan’s hatred for ‘Israelis’ is not thought ‘beyond the pale’ by the BBC commissioning editors, neither is his openly declared murderous intent towards the whole lot of them considered to be incitement or likely to discredit the BBC in the eyes of the law, or even in the eyes of the audience.

So, given that the BBC generally disapproves of Israel, is the frequency of his BBC appearances a bad thing, in itself? He’s in line with the consensus, after all. Maybe his extremism is slightly problematic?  Perhaps not, in the eyes of the average viewer. Like Bari, you might argue: If you support the Palestinian resistance, “you do not consider” the BBC’s ‘attacks’ on Israel tendentious.
That’s certainly one way of looking at it, although that might be hard to reconcile with the BBC’s policy of avoiding value judgements.

I was about to contrast Bari’s Dateline ubiquity with the absence of the contrasting views on air, of another controversialist, Tommy Robinson. I was going to argue that the BBC was afraid to ‘give him a platform’ even under the guise of allowing him to hang himself with his own rope so to speak. Instead, they marginalise the whole of the EDL by naming them “the far-right group” (what on earth does that mean?) and sanctimoniously refuse to give them the oxygen of publicity.
Then along came Today. Sarah Montague took up where Jeremy Paxman left off, i.e. failing to demolish Robinson’s arguments on any level whatsoever, and also failing to demonstrate a scintilla of familiarity with any of his well-known lines of defence.

Like Paxman, she appeared pretty confident that she was dealing with an inarticulate racist thug, who was the leader of a violent bunch of white-supremacist hooligans. But no. Tommy wasn’t having it. He had an answer for everything she threw at him, even though she put on that special tone of voice, modulated to project scorn and contempt.

Complaining that Sharia courts did a disservice to “British women” Tommy R managed to sound more accepting of Muslim women’s Britishness than Sarah. She fell into a trap with the issue of the balaclavas.”Why,” she wanted to know, “must they hide their faces?” Snap! Went the elephant trap. “Death threats”  “Job losses” Yes, indeed, the same death threats that are shocking and Islamophobic when covertly aimed at Muslims, but disregarded  - right up to the point where six bearded fellows, really and truly intent on murder and mayhem - not just hinting, are caught in the nick of time, due only to their own incompetence. 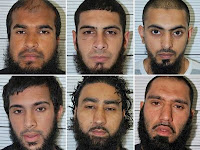 Even then, aforementioned plot has not become the subject of hair-tearing and renting of gowns and a group called ‘Tell Tommy’ has not been set up and awarded a six-figure sum to tackle the problem of anti-EDLism  and invited on to the BBC to talk to Ed Stourton about the EDLophobic  backlash every time someone says something balaclavaist.

The main thrust of the interview was to establish whether  Tommy condemned violence as a tactic, which he duly did. He explained that the EDL's activities stemmed from the fact that the working class voice wasn’t being heard.

Over at the Huffpo they’re saying that it was a ‘soft’ interview, and that you mustn’t take Tommy at face value. Well, that’s as may be, but while you’re complaining about that, you mustn’t forget Bari, and the legitimacy of his particular face’s value.
So did the Today programme prove me wrong in feeling that the BBC doesn’t give the EDL the equal opportunities that  the BBC's diverse, all-encompassing agenda demands?

Afraid not. Later on in the programme, another pro Muslim discussion, for balance, and this time Dr Matthew Goodwin was nowhere in sight.

“Islamic extremists on one side, the EDL on the other” announces Sarah,[....] “So how do we stop people being sucked in by such extreme views?” she asked Shaista Gohir, chair Muslim women's network UK, and John Denham, Labour MP.

“There are some people who don’t want to give him (Tommy R) a platform,” says Sarah. ‘we’ve had response to that effect after our interview.” I assume it’s those folk at the Huffpo and the Guardian, Tweeting.

“The cuts and the bankers” opines Shaista, ...”and the scapegoat is the Muslims. The EDL are manipulating the attack in Woolwich for their agenda” she says “and the ishoo of the sex exploitists has been packaged into a Muslim issue.” To me, that is bizarro.

Denham blames the ‘loose use of language.’ He has received a petition from nice Muslims who object strongly to being held responsible for this crime.(Woolwich) “That voice should be heard” he adds.  “ The labour party says the violent anger fades away if you can talk about these issues.”

So you see what I mean. I think we should give up on the BBC. It’s hopeless.

Here’s something to warm the cockles of your heart.