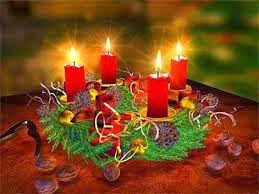 If you read the previous post in this series you might have expecting to read this some time last night rather than this evening. Well, that's anticipation for you. It can lead to fulfillment or disappointment.

Such was the theme of...

Mark Tully (formerly known as "Mark Tully in Dehli") presented a whole episode about anticipation. I didn't anticipate much from it, but was pleasantly surprised.

The theme of anticipation was chosen to mark the start of Advent, as Advent is the time...need I say? Ah yes, I probably do these days!...when Christians anticipate the birth of Jesus.

I found myself meditating on the title of the programme, which I've always known to be the closing phrase from my favourite poet George Herbert's Prayer I.

What had never struck me before is how apt the title really it, as the programme closely follows the structure and spirit of that great poem:

PRAYER the Churches banquet, Angels age,
Gods breath in man returning to his birth,
The soul in paraphrase, heart in pilgrimage,
The Christian plummet sounding heav’n and earth;

Engine against th’ Almightie, sinner's towre,
Reversed thunder, Christ-side-piercing spear,
The six daies world-transposing in an houre,
A kinde of tune, which all things heare and fear;

Softnesse, and peace, and joy, and love, and blisse,
Exalted Manna, gladnesse of the best,
Heaven in ordinarie, man well drest,
The milkie way, the bird of Paradise,

Church-bels beyond the stars heard, the souls bloud,
The land of spices, something understood. 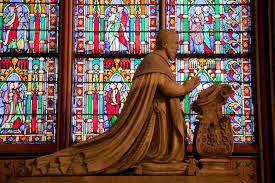 Just as with Prayer I, Something Understood proceeds by juxtaposing all manner of fanciful and individually compelling images, building them up into a suggestive miscellany of ideas which, somehow, manages to hang together and which, in some way, has the effect of amplifying the given theme - whether it be the nature of prayer or the nature of meditation.

So, musically, we were presented with a lovely Basque carol, Rosemary Clooney's cutesy Where Will the Dimple Be?, an even-cutesier slice of choral Mendelssohn, a spry gospel tune (featuring Louis Armstrong), a country-and-western-style ballad entitled The Longer the Waiting (The Sweeter the Kiss) and the closing moments of Vaughan Williams's wonderful string orchestral piece, the Tallis Fantasia ...

...all washed down with a passage from Thomas Hardy's The Trumpet Major, a glass-fully-empty poem by Linda Pastan, part of a sermon from Cardinal Newman, a reading of Faustus's closing monologue from Marlowe's Doctor Faustus (one of the most powerful passages in the whole of English literature), a disappointingly pedestrian poem by Gerard Manley Hopkins, a winsome snatch of Winnie the Pooh, and a well-employed neuroscientist's reflections on the best way to pour a pint of Guinness. All intended to leave you with 'something understood' about the theme of anticipation.

I can't say it led me into many particularly profound thoughts, though I did pen this poem in its honour - extending the theme into matters philosophical:

A spider spins its web, but why?
In anticipation of a fly?
And does the seed send forth its flower
To find a bee and sweetly wow 'er? 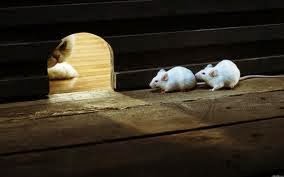 And talking of expectation...

Walking up to a department store's clothes counter, the pretty girl said, "I would like to buy this material for a new dress. How much does it cost?"
"Only one kiss per yard," replied the male shop assistant with a grin.
"That's fine," said the girl. "I'll take ten yards."
With expectation and anticipation written all over his face, the shop assistant quickly measured out the cloth, wrapped it up, then teasingly held it out.
The girl snapped up the package, pointed to the old man standing beside her, and smiled, "Granddad will pay the bill."

And talking of pretty girls...

OK, there was a measure of classic BBC 'ism'-hunting in this programme, as presenter Charlotte Smith tried (and tried) to tempt the female farmers of Higher Melcombe Farm in Dorchester (very Thomas Hardy!) to complain about sexism in the farming industry, though they themselves mostly put the resistance they were getting (from some quarters) more to the youth and initial inexperience of the family's chief farmer, Harriet, than to the fact that she's a woman, but still...This was a fascinating, unsentimental but rather touching programme. It's the sort of programme that fills you again with admiration for Britain's hard-working and hard-pushed farmers. Unrelenting effort is needed to keep a farm afloat.

The farm was run by their father until his early death from cancer four years ago. Instead of selling up, Mr Besent's wife and daughters - led by middle daughter Harriet - took up the challenge, and have kept the farm going and thriving. 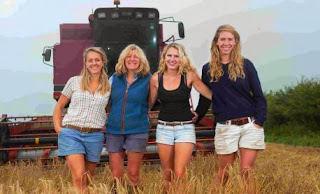 Their business still retains the name Besent & Sons. Very good luck to them!.

Well, not much bias so far. Still next up Sunday. There's bound to be bias there...

This edition discussed all of those things.

The 'gays and the Church' theme took the form a civilised discussion about same-sex blessings in the light of the Pilling Report. Both sides of the argument were represented (Rev. Andrew Symes from Anglican Mainstream and Savi Hensman from the Lesbian and Gay Christian Movement). William Crawley treated them in an even-handed fashion, allowing them to speak with little interruption. If only more BBC discussions could be like that!

Nearly a third of the programme was given over to the Catholic abuse story. It has been one of the major religion stories of our time, but Sunday's pursuit of the story has long had the feel of an obsession - even if a case can be made in its defence.

You may recall an early survey on this blog which charted the extent of this partially-justified obsession over the course of nearly two years, finding that the issue featured on 28% of the 93 editions of the programme between early January 2011 and mid October 2012. In comparison, over the same period, the issue of Muslim grooming gangs and child abuse by imams and within Islamic institutions was dealt with in just 3% of those programmes. That statistic for editions of Sunday which spotlighted specifically Catholic church abuse doesn't, of course, take into account how much time those editions gave to the issue. If it had have done it might very well have made the extent of its coverage appear even more striking, given that such discussions frequently took up similar proportions of the programme's airtime (or even more). 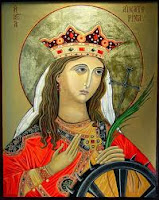 The programme also discussed St Catherine. There's a new blockbuster film coming out about her, and its director Michael Redwood was on hand to discuss her. He's been fascinated by her for seventeen years, and sought to find her personality - a principled, strong, gentle woman with a sense of humour. (She'd make a great Disney cartoon heroine too, by the sounds of it. I can see her now, with her talking vulture sidekick. Oh, the laughs!!).

He said that St Catherine's Monastery (in Sinai) receives between one-and-a-half and three million visitors a year (a somewhat imprecise figure!) and that it contains a synagogue and a mosque.

As a boy I was always horrified at the thought of St Catherine's end - on the wheel for which she is remembered on Bonfire Night. I thought it wasn't the done thing to treat a woman in that way! And - do you know, what? - I still think that!

Talk of fireworks leads me seamlessly on (in true Libby Purvis fashion) to the following joke - and, yes, it's Tommy Cooper again:

A local policeman had just finished his shift one cold November evening and was at home with his wife. “You just won’t believe what happened this evening , in all my years on the force I’ve never seen anything like it.” “Oh yes dear, what happened ?” “I came across two guys down by the canal, one of them was drinking battery acid and the other was eating fireworks.” “Drinking battery acid and eating fireworks!! What did you do with them ?” “Oh that was easy, I charged one and let the other off.”

OK, the next post will tackle Sunday Worship, Will Self's A Point of View and Paddy's Broadcasting House.

Can I hear the anticipation beginning to growing again? (No, it's just my laptop wheezing away).
Posted by Craig at 22:51

Labels: 'On Your Farm', 'Something Understood', 'Sunday'