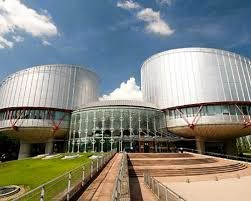 Some senior British judges are now echoing the concerns expressed by many British people (including me) that the unelected judges of the European Court of Human Rights are aggressively asserting their right to overrule British laws, as devised by our own sovereign elected parliament, and that that's a bad thing.

Anyone from a planet orbiting Alpha Centauri who enjoys watching what the neighbours are getting up to behind closed clouds (especially over Britain) and who keeps tuning into BBC News (through their ever-so-fetching green antennae) might infer (from the BBC) that those concerns are exclusively held by right-wing politicians, right-wing newspapers and right-wing members of the public - though it's quite clear (to me, a proud Earthling) that plenty of left-wing voters also share those concerns, as do a good number of left-wing British politicians.

So when this morning's Today reported on this very story it wasn't surprising (to me) that the BBC's Mike Thomson chose a Conservative MP, Dominic Raab, to be his ECHR critic of choice.

Against the Tory MP (for whom Today's non-Tory listeners might be expected to feel a knee-jerk lack of sympathy), Mike Thomson pitted (a) Ben Emmerson, UN human rights lawyer (and partner at Cherie Blair's Matrix Chambers), (b) Rupert Skilbeck of the George Soros-funded Open Society Justice Initiative, (c) Roderick Liddell, official representative of the ECHR and (d) Paul Mahoney, a British judge on the ECHR.

Every single one of those four speakers represented the pro-ECHR side of the argument. So that's 4 against 1 - which sounds biased to me.

Make that 5 against 1 though, because the report also featured a woman with a Middle Eastern-sounding name - and a hard luck story - residing in Germany who believes that the ECHR doesn't have anywhere near enough powers to overrule national laws. Yes, she wants more ECHR intervention.

OK, the Conservative MP got a second bite of the cherry but it was the most aggressively pro-ECHR speaker, Ben Emmerson, who was given both the first and last word, denouncing the views of all of us who share Mr Raab's concerns (in a particularly forthright manner).

So far so biased then.

Still, in the hallowed 8.10 spot (is it as hallowed on Saturday though?) came two interviews.

The first interview was conducted by the aforementioned Mike Thomson, making the 5-1 bias in his report up to a 6-1 bias by interviewing Judge Dean Spielmann, the Luxembourgish President of the European Court of Human Rights. Mike gave him a interview so soft you could have slept on it in. Judge Spielmann defended his Court and firmly asserted its supremacy over British parliamentary law and Mike even coaxed him into denouncing the UK government too.

By this stage I was getting slightly het up. (I'm not the type to get very het up).

Still, it has to be said that James Naughtie's subsequent interview with Lord Judge, the judge who was formerly Britain's top judge, softened my unease slightly as it was hardly more challenging than Mike Thomson's interview with Judge Spielmann. I judge both interviews to have been pretty gentle ones.

That's all for the good though, as I was interested in both what Judge Spielmann and Lord Judge had to say, and to have the chance to hear their positions without overly intrusive BBC interviewing was a blessed relief.

So, less spinning please BBC (as per Mike Thomson's report) and more unobtrusive juxtaposing of intelligently-expressed contrasting opinions please (as per those 8.10 interviews).
Posted by Craig at 14:32