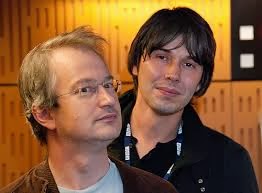 I do rather like Radio 4's The Infinite Monkey Cage.

It's a robustly pro-science programme in the network's overwhelmingly arts-dominated schedule and almost every edition features bona fide scientists sharing their insights with the listening public. The results can often be fascinating and informative and the programme has covered a vast range of scientific fields over the course of its nine series.

Today's edition, for example, featured immunologist Dr Sheena Cruickshank of Manchester University. She specialises in parasitic worms and shared something that I found very interesting - so much so that I'll share it with you here (though not quite as much as I first shared when I posted this piece!).

Parasitic worms are something which we, in countries like the United Kingdom, don't suffer from any more. In the past, however, they've been a significant problem, and even King Richard III suffered from them -  as we recently discovered.

Many countries though do have a serious problem with parasitic worms and some 2 billion people around the world still suffer from the the little blighters.

Parasitic worms, indeed, are the main reason why children in many countries don't go to school. Deworming in Kenya has, therefore, resulted in school attendance rising by 20% there.

Intriguingly, according to Sheena Cruickshank, whilst we in the UK (and the U.S. and Europe) may not suffer from parasitic worms any more we do suffer a lot from allergies. In contrast, countries where worms are a serious problem don't have a significant problem with allergies. Why is that? (I'll leave that question hanging in the air).

I suppose the downside with The Infinite Monkey Cage is that its comedy + science format can force some of the serious scientists who appear on it to feel the need to try to be funny, resulting in some of them seeming over-larky - something which can make listeners squirm (like Richard III with his worms). Plus some of the comedians can spoil the programme by being either unremittingly jokey or seriously dull.

What though of the two presenters, Robin Ince and Brian Cox?

They are, I suppose, a BBC arts graduate Radio 4 controller's dream pairing for such a programme: a left-wing 'Radio 4 comedian' [you know the type]...and Brian Cox [the BBC's go-to-for-everything-scientific man of the moment].

Still, I have to say that I don't have an issue with Brian Cox on The Infinite Monkey Cage. He's quite an engaging presence and doesn't intrude too much.

Neither does Robin Ince, though he's less to my taste.

I like his enthusiasm for science, but he rarely makes me laugh. I don't mean to be unkind but his level of humour is on a par with that of Marcus Brigstocke. (Ouch!) Plus, being a Rightie, I always await with a sense of grim inevitability his invariable left-wing/right-on crack, whatever it may be - a dig at Boris Johnson, Sarah Palin or the Daily Mail maybe - followed by the equally inevitable dutiful half-laugh from the audience. (Today we were 'treated' to another time-honoured right-on whinge about girls being given girls' toys and boys being given boys' toys).

Still, even Robin Ince's 'humour' can be forgiven for the shafts of genuine laughter and scientific illumination provided by The Infinite Monkey Cage.
Posted by Craig at 19:42