What constitutes a religion?

The report on same-sex marriage featured a balanced range of voices but did what such reports tend to do on Sunday: End with the liberal point of view. (One day, when I've got some spare time, I'll properly test that hypothesis out). It looked at the continuing debate within the various denominations of Christianity and Judaism (though, oddly, not Islam).

The crowding-out problem in particular resulted in a somewhat cramped closing discussion about what constitutes a religion.

This took place in the light of the UK Supreme Court's ruling this week in favour of Scientology, and the programme's guests were Professor John Haldane from St. Andrew's University and Professor Linda Woodhead from Lancaster University. The discussion seemed to have barely got underway when they ran out of time. 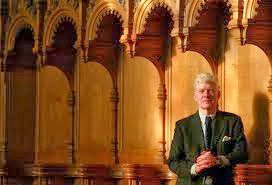 Professor Woodhead supported the court's ruling, while Professor Haldane disagreed with it (so that was a balanced choice of guests); however, it was their more general discussion of how to define a religion which was particularly absorbing, and of which I'll try to give you a flavour.

Ed read out the court's description of a religion as "a spiritual or non-secular belief system which claims to explain mankind's place in the universe and relationship with the infinite".

John Haldane queried the words "spiritual" and "non-secular", describing non-secular as "a contrastive term": "You might say, 'What does that contrast with?', and the obvious answer would be 'religion'" - i.e. a circular argument!

He proposed instead, if you're attempting an abstract definition, that a belief in a transcendent reality, a belief in something beyond the natural order, must be an essential part of that definition. 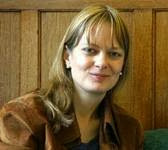 Linda Woodhead was sceptical, raising the old 'Brains Trust' point: 'Well, that depends on what you mean by 'transcendent'.

Prof. Haldane defined it as being the idea that religion "seeks a source of meaning of the world beyond the world, that is outside the order of nature" and argues that Scientology isn't a religion in those terms, merely a kind of "cosmological speculation about people on other planets".

Ed Stourton raised the question of strength of belief and whether that's a factor.

Linda Woodhead preferred the idea of sincerity of belief. Hence, the Jedi Knights (of Census fame) aren't considered a real religion because they weren't really sincere, just a bit of a joke.

John Haldane was sceptical about using sincerity as a criteria as you can be sincere about all kinds of things that couldn't be considered grounds for religion, such as your sincerity towards your relationships with other people or your belief in science. (Richard Dawkins is sincere and strong in his belief that there's no God and that religion is a bad thing, of course).

Just as Linda Woodhead said that Prof. Haldane was moving towards the question of what is true, Edward Stourton had to bring things to a close. 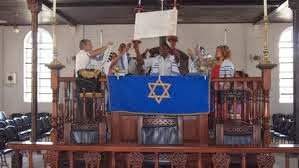 The other interesting segment reported on the plight of Jamaica's tiny Jewish community - and it was quite a good news story.

When the Spanish monarchy proclaimed the expulsion of the Jews in 1492, Columbus was sailing the ocean to blue to the Caribbean and (without intending it) opened up one escape route for Spanish and Portuguese Jewish refugees, the first of whom arrived in Jamaica as early at 1494. That makes them one of the oldest Jewish communities in the Western hemisphere.

Recently, the tiny community there (of around 200 people) has received an academic boost - as well as a growing number of converts.

DNA testing has revealed that around 424,000 Jamaicans have some Jewish ancestry. Doing a quick calculation, that suggests that just under 15% of the Jamaican population has Jewish ancestry. Jewish-sounding surnames are common on the island, we were told, so that might have been a big clue anyhow!

When it's not beating its various drums, Sunday can be such an interesting programme.
Posted by Craig at 11:51