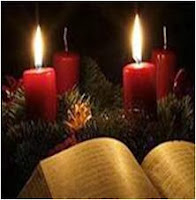 Radio 4 continued to mark the start of Advent with a live service from Kelvinside Hillhead Parish Church in Glasgow, led by a Gay vicar - the Rev. Doug Gay.

It was a rather beautiful service, and I even enjoyed the sermon. (Aren't they supposed to be boring?). It reflected on the relevance of the seasons of the church year.

It was the music though that really brightened up my day. The opening hymn - O come, O come Emmanuel - has long been a favourite of mine. There was also a recently-written hymn, set to the music of the Iona Boat Song, by one John Bell - presumably the left-wing Thought for the Day John Bell. That was lovely too. And looking at the website afterwards, it turned out that the organist was none other than Kevin Bowyer - a stellar name in the world of organ music. The standard of performance by all concerned was excellent throughout. Amen.

The housebound (and the bone idle) Christian has long relied on Radio 4's Sunday Worship, and long may it continue. Amen.

Incidentally, I opened the fifth door of my advent calendar this morning. I really wasn't expecting Tom Daley to come out.

Another sermon followed, albeit of a very different kind....


Yes, it was time for the Rev Will Self's point of view.

Hmm, A Point of View.

I will admit to thinking that my long lists of all the lefties and non-righties who Radio 4 chose to invite to present this particular programme over the last three years provided particularly compelling evidence for proving just where the station's political centre truly lies - i.e. on the Left - especially given that not a single right-leaning contributor appeared between 1st Jan 2010 and 8 Aug 2013. (Yes, not a single one.)

That will probably be counted as 'reasonable balance' by the BBC!!!!!

I scoff, yet...I did note that one of the BBC's defenders at Biased BBC (was it Conspiracy Theory Central?) recently defended the programme by citing Roger Scruton's appearance on the programme!!! (He/she did have the good grace, however, to concede that this was not typical, and that the programme's choice of non-right-wing guests was predictable).

Will's talk was a Jeremiad about modern politics. 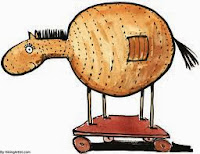 Was he even aware that his own Trojan Horse was a Trojan Horse at all? He strikes me as being the sort of man who is quite capable of not being able to see the Trojan Horse in his own eye whilst loudly pointing out all the My Little Ponies in the eyes of others. (Rev. Gay could quote him something to that effect.)

You can read a transcript of Will Self's talk here.

In it you won't find the following joke:

A horse walks into a bar. The barman says, "Why the long face?"
The horse replies, "I came first in the Grand National and they gave the prize money to that idiot on my back."

From horses to birds... 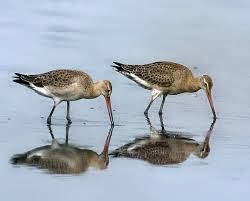 Springwatch's Martin Games-Hughes talked about the Long-Tailed Dipshit, a bird that can imitate every Elton John song by...ah, sorry, no, no...he talked about the Black-Tailed Godwit - and they, apparently, are blissfully unaware of Elton John (hence their name).

Not a bad hour of Radio 4 listening then, but the dreaded Broadcasting House was waiting around the corner...
Posted by Craig at 21:12