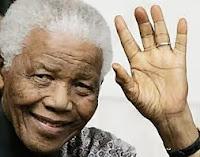 You really should check out this morning's BBC News and Sky News website home pages. They are strikingly different, and have to be seen to be believed.

The BBC is still leading with Nelson Mandela, and its home page is heavy with Mandela stories. I count 31 separate articles (of one kind or another) on the home page alone.

Sky News is leading with match-fixing claims instead and has just one Nelson Mandela story (in third place in its running order). Only when you get to the bottom of their home page do you find three comment pieces (none of them new today).

Is the BBC feeding an infinite public interest in Nelson Mandela then?

Well, the BBC homepage has a 'Most popular' section which shows the ten most read stories at the time - and this is what people want to read right now:

So, the public's appetite for Nelson Mandela news doesn't seem to be quite as huge as the BBC's.

Incidentally, Radio 4 this morning is hardly less of a Mandela shrine than the BBC website - so far there's been a Something Understood Mandela special, a Mandela-dominated Sunday and there's a Mandela-related Sunday Worship still to come. At this rate Shula is going to be giving us her Mandela memories on the Archers omnibus later this morning, and Graeme, Tim and Barry will be singing ANC anthems on Pick Up Tune.

Incidentally, I see that Rod Liddle hasn't been cowed by the Twittersteria over his criticism of the BBC's Nelsonmania; indeed, he appears to be warming to his theme.


Late last week I watched BBC News at Ten in the hope of seeing what the Beeb did with the story about its chairman, Lord Patten, refusing to testify before a House of Commons committee about alleged political bias over Europe within the corporation.

I rather hoped that Patten himself would be interviewed: there is something about the man that makes me want to join a secretive Marxist revolutionary cell and start blowing things up.

It’s that aloof disdain, I think, plus the epic self-regard.

Sadly News at Ten, all of it, was otherwise occupied with the death of Nelson Mandela. Maybe it’ll be on Question Time, I thought — but that programme had been moved to make way for more stuff about poor old Nels. So I took the dog for a walk, had a few drinks, collapsed into bed and rose late the next day and switched on the BBC to see if maybe Fatty Pang, as Patten was known to the Chinese, was now getting an airing.

Nope. The lead story informed me that, mysteriously, Nelson Mandela was still dead and that his regrettable state of being still dead, at the age of 95 after a long illness, was more important than anything else happening in the world.

Mandela was a great man, beyond all doubt. But for the BBC — and plenty of other news organisations — someone has blurred the line between “respect” and “absurd, interminable over-indulgence”.  I felt much the same about the news coverage when Margaret Thatcher died, just in case you think I’m one of those far-right zealots who think Mandela should have been hanged as a terrorist. I don’t think that. I just weary at the predictable relentlessness of the coverage.

The BBC News website is still leading with (and saturated by) Nelson Mandela stories - and their readers remain pretty uninterested.

Here are the 'most popular' stories at the moment:

Yes, the BBC News website is still leading with Nelson Mandela, though there are now a mere 23 separate articles on their homepage.

And, gosh, the British public still aren't interesting in their coverage. Here's now's list of the 'most read':