Time is a thief, according to the old saying. He seems to particularly enjoy stealing from bloggers.

So, with just one day left before many of last Sunday's Radio 4 programmes are melted into air, into thin air, here we are, still stuck in the middle of (last) Sunday morning with barely enough spare blogging time to reach The Archers before programmes start disappearing off the i-Player, and with this Sunday just about to ring the doorbell.

So this series looks likely to go the way of the England cricket team then.

The dreaded Broadcasting House turned out to be one of the best ever editions of that programme. That's partly because it was a quarter of an hour shorter than usual.

There was, however, some interesting stuff on it, including an interview with a City high-flier who used to fly high on copious amounts of cocaine. She now feels good about herself, having given up. Paddy O'Connell attempted to get her to say something positive about her drug-taking experiences, but her only concession to that line of questioning (no pun intended) was to say that her experience of getting over cocaine use has been rewarding and that, as a result, she no longer feels she needs to hide behind artificially-stimulated masks at all. The lesson here, of course, is that cocaine is never a solution. Unless of course, you dissolve it in water. 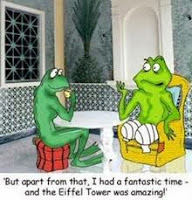 There was also a report from France on why we Anglo-Saxons don't read their contemporary literature. The French pride themselves on being the world's most literary nation, with seven million of them writing books. (I've myself have been thinking about writing a mystery novel. Or have I?)

Amusingly, the BBC reporter then conducted a survey on the Paris metro and found that only two out of the thirteen or so people there were actually reading French novels either - so even the French seem to prefer reading Anglo-Saxon authors (in translation) to French ones. The others were reading the likes of James Patterson, Patricia Cornwell and Ken Follett - or translated Russian and Italian fantasy novels.

The BBC reporter (Hugh Schofield, if you really must know!) asked a French novelist whether the problem lies more with us Brits for not bovvering to arse ourselves with reading all that French intellectual crap, or whether it's because the French write intellectual crap that no Brit (or French underground user) would want to read. (OK, he may not have put it quite like that!) She bridled somewhat, saying the French write all kinds of books, including crime novels, and that we Anglo-Saxons ought to be a bit more curious about other countries' literature. (Yeah, like that's going to happen!)

I have to say that I like read translations of foreign books. I've just taken up speed reading. Last night I did Madame Bovary in 20 seconds. I know it's only two words but it's a start.

Incidentally, Hugh went to three fancy Parisian restaurants in the course of that report. Ah, it's a hard life being a BBC foreign correspondent.

There was also an 'Advent calender', featuring Mitchell & Webb, with Robert Webb playing the Queen of Narnia and David Mitchell playing the Chairman of the Narnian Retail Consortium. The Queen's policy of "always Winter but never Christmas" has been proving a bit tricky for the Narnian business community. They'd prefer "Always the run-up to Christmas, but never Christmas" instead:

It would really help the economy. Think of the banners: 'Beat the eternal pre-Christmas rush!', 'Stock up on your unbelievably enormous Advent calenders!', 'Hurry, only infinite shopping days left!'

By the way, I was only saying to Tom Daley the other day that I was a bit naive as a youngster. When I heard about so many people "coming out of the closet", I just assumed that all gay people came from Narnia.

The programme ended with the paper review, featuring Matthew Parris of the Times, BBC DJ Nihal and Julia Hobsbawm - a politically-balanced panel with MP on the right (just about), JH on the left and Nihal as impartial as only a BBC employee can be (yeah right!)

There was a little controversy about this section over at Biased BBC as Matthew had a dig at some of the right-wing newspapers (not his own, I hasten to add) for making (anti-European) political capital over the name of the helicopter that crashed in Glasgow by branding it a 'Eurocopter', not realising that the helicopter really is called a Eurocopter. The controversy at B-BBC arose because Paddy failed to correct his mistake, suggesting - to some - pro-European bias on his part. I'd suggest that he might have failed to correct it because he was as clueless as Matthew, and didn't realise that it was a mistake.