Hugh Can Call Me Nelson

If it hadn't started with Nelson I'd have died of shock. This is the BBC, and BH after all. Some things are simply inevitable (like Kian from Westlife winning I'm a Celebrity tonight).

The BBC's highly opinionated Hugh Sykes had been dispatched (at license fee payers' expense) to join the other 15,000 BBC reporters down in South Africa at the moment.

Hugh did what Hugh does, expressing his impeccably left-of-centre personal feelings with some panache.

His final barb laid into Mrs Thatcher's government with a sharpness even Neil Kinnock or Peter Hain would have been hard pushed to rival:

The world owns Nelson now, as will become clear when all those world leaders arrive.

Including a representative, possibly Prince Charles, of a nation where a former government conspired with Apartheid by dismissing Nelson Mandela as a terrorist.

A sharp word that, 'conspired'.

If you can't picture Hugh by the way, here's a photo of him wearing a Palestinian keffiyeh: 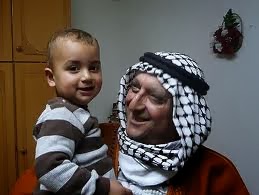