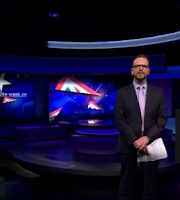 Considerably more about this tomorrow (possibly), but tonight's Newsnight took this past week's levels of anti-Brexit bias and simply multiplied them. My jaw dropped even more.

Bed beckons, so this is merely a sketch of what I've just witnessed and been appalled by.

That discussion was prefaced by Newsnight presenter James O'Brien explicitly making the case for the 48%. "Who will speak for the 48%?" was his question.

Before that came a report from France which featured voice after voice after voice expressing regret and despair at Britain's Leave vote - except for a short section on the Front National, which was immediately qualified by an academic putting their views in context. Given that I've read reports about polls showing a majority of French people wanting a referendum on French EU membership, it surely can't just be 'the far-right' who aren't weeping over our Brexit vote, can it?

And before that came an unchallenged interview with (Remain-supporting) The Remains of the Day author Kazuo Ishiguro, bemoaning (with James O'Brien's help) the consequences of the Brexit vote for Britain's multiculturalism. He sees "Neo-Nazism" as resulting from the result. Some Leave voters are racist, he says. He wants a second referendum.

And before that came a report from Burnley on why people there voted Leave, and what they think now. Minor-key music provided the background. Ordinary people spoke, some still backing Leave, a few still backing Remain, some sounding equivocal. Someone said, 'we're not stupid'. The next 'vox pop' sounded as if she hadn't a clue. I felt deeply suspicious of it.

And to start things off we had some questionable-sounding spin on polling 'evidence' from Ipsos MORI for the BBC.

Please watch and judge for yourselves. I will rewatch it tomorrow, just in case my initial impressions have misled me.

Here was James O'Brien's framing of the final discussion:

Lose by 4% in a general election and you find yourself in strong opposition with a fighting chance of halting legislation and embarrassing the government. Win 48% of the vote in a referendum and you find yourself with absolutely nothing. Politically your position is, in many ways, no stronger than if you'd won 0%. With all the Conservative leadership candidates now fully committed to Brexit and the winner, of course, guaranteed to govern, what will opposition even look like? And who will speak for the 48%?

P.S. Here's a comment seen elsewhere that strikes a chord with me (given what I've seen):

Evan Davis, all this week on Newsnight (BBC2) (and James O’Brien last night on the same show), seems to have refashioned the flagship current affairs programme as both a progressive pro-EU safe space and as a working group dedicated only to bad-mouthing Brexit and seeking ways (any way) to undo it.