What's in a name?

24 mins ago, BBC Breaking News (sic) finally broke the news of the name of the suspect in the Munich killings, several hours after most other UK media outlets. 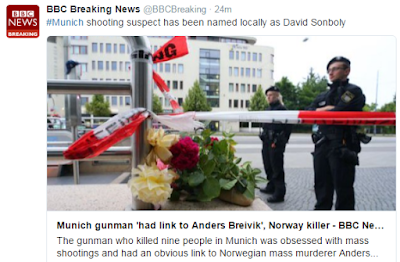 Everyone else has been reporting his name as "Ali David Sonboly".

So why has the BBC missed out the Muslim-sounding part of his name here?

There could, of course, be a good reason for them doing so:

Maybe everyone else has been misreporting his name and he isn't called "Ali".

Maybe he was always known to his friends and family as "David Sonboly" rather than "Ali Sonboly",

Or maybe the BBC is simply censoring the Muslim-sounding part of his name.

It's getting ever more confusing.

But it's a fact nonetheless that I've not seen any other major (or minor) media outlet other than the BBC just call him "David" so far. And that calls for an explanation.

And if they are doing it as an act of deliberate censorship then action needs taking again them.


Sky News - one of the few major UK media outlets, alongside the BBC, that hadn't reported the name earlier, did eventually report it - and did so an-hour-and-a-half before the BBC:

They gave the gunman's first names in a different order (though still including "Ali"). The plot thickens.

The BBC's main article, incidentally. has now been updated and it too calls the killer "David Sonboly".

Its unique primary focus on the Breivik angle also continues.

The BBC has unilaterally chosen not to report the Munich attacker’s full name, in what appears to be an attempt to scrub any Muslim or Islamic heritage link to its coverage of the incident.

The Breitbart headline overstates things somewhat. Raheem himself notes that some BBC correspondents are calling the killer "David Ali Sonboly" (he heard it on the News Channel at 6:32pm, and I heard it on PM on Radio 4 tonight), so it's not being universally applied. But, that said, he was described simply as "David Sonboly" on BBC One's main evening news bulletin (though later described by Gavin Hewitt as "David Ali Sonboly") and the BBC website is still being inflexible on the matter, so some official 'guidance' from senior BBC managers must have gone out.


FURTHER UPDATE: News Sniffer shows that 4 hours after reporting the name as "David Sonboly" the BBC amended its website report: What had previously read,


His name has not been officially released but he is being named locally as David Sonboly.


His name has not been officially released but he is being named locally as David Ali Sonboly.
He has also been referred to as Ali David Sonboly, or David S.