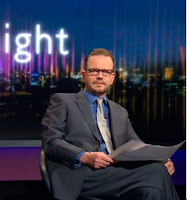 Left-wing 'shock jock' James O'Brien, in his hip Newsnight suit and tie, nonchalantly went out of his way last night to humiliate his "Trump-ette" guest by flinging racist ex-KKK screamer David Duke's 'kind words' for The Donald's policy platform in her face, again and again and again and again.

Nothing she said about how irrelevant that kind of question was stopped him. He just kept at it, and (down the line from the States) she couldn't quite cope with it.

He then moved back to his other (anti-Trump) guest (who he behaved respectfully towards throughout), before saying that he could guess what the "Trump-ette" would say next and then stopping the interview there before letting her back in - the camera focusing on her as he did so.

Of course it was very rude and, obviously, meant to be. This was Newsnight and JO'B signalling their collective virtue.

'Impartial' it certainly wasn't, but, inevitably, JO'B's many, many (left-wing) admirers on Twitter went into absolute ecstasy about how great their man is, and how he should be on Newsnight much more often, and how he gave that "Trump-ette" what was coming to her. It was like one huge (left-wing) orgasm.

Non-fans of James (like me and Sue) are, therefore, going to remain disappointed. We're not going to see the back of JO'B on Newsnight any time soon. He's becoming a fixture. We're stuck with him.
Posted by Craig at 22:24