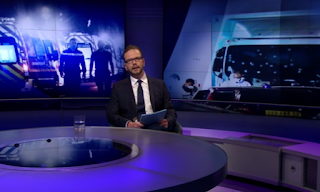 If there's one thing I picked up on earlier (from commenters on Twitter and at Biased BBC, Guido Fawkes, The Spectator, etc) is just how strongly James O'Brien stood out today for pushing a particularly aggressive line on the Nice atrocity on his LBC programme.

He provoked considerable ire for so doing (as befits a shock jock).

Cutting off at least one caller (apparently), he ranted for ages (apparently) on the subject of why it's wrong to blame Muslims for such things as the Nice massacre (a matter that - apparently - mattered to him above all else).

Of course, as an LBC presenter, he's entitled to rant as much as he likes. (It's partly what he's there to do.) But, having read so much today about how far he'd gone in being biased today, I seriously gulped when I saw that he'd be presenting tonight's Newsnight tonight...of all nights.

Would his very open bias at LBC (where he's allowed to be out-and-out biased) feed into his presentation of Newsnight? Or would be hang up his views (Hugh Sykes-style), as required, on the BBC's coat-peg of 'impartiality'?

Well, Newsnight first invited on Alain Richard, a French socialist. James O'Brien, respectfully, asked him (without interruption) why France has been hit more than other European countries and how divided he thinks his country is. M. Richard said he didn't want France's Muslim community to be discriminated against/opposed by the rest of French society. And that was that.

JO'B then talked to a man from the French National Front, Marc Etienne Lansade. The video connection was absolutely terrible, so M. Lansade really struggled to even hear JO'B's questions tonight. The interview soon collapsed.

You just heard, I hope, the former defence minister Alain Richard suggest that Islamic State want to see more division in France and would particularly like to see French Muslims discriminated against more. Do you agree with him?

I'll have one more attempt. My apologies to you, monsieur. Alain Richard, the former defence minister, suggest that Islamic State want to see French Muslims discriminated against more. Do you agree with his analysis?

I understand your answer although the question really was about the response politically in France to people not perhaps responsible for the spread of Salafi-ism (sic) or Wahhabism. Do you feel French Muslims feel less safe now, because not only are they are the risk of being victim to terror attacks, they are also, in some quarters perhaps, at risk of being blamed for them?

I think the technology has defeated us....

Hmm, very much still pushing a line I think (on the 'impartial' BBC).

P.S. Controversial Newnight reporter Secunder Kermani's report then stressed how questionable are the claims of an Islamic motive for Mohamed Lahouaiej-Bouhlel (not religious, liked alcohol). There's "no concrete evidence" that his attack was jihadi-inspired.

So Newsnight as a whole seemed to be pushing a line here.
Posted by Craig at 23:48