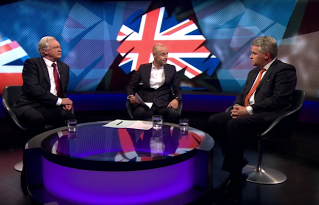 Keeping up with Newsnight's post-Referendum coverage (whilst, uncharacteristically, trying to be as brief as possible)...

The past couple of editions of the programme have focused far more on party-political infighting than on more substantial, Brexit-related matters (the things we really need to be thinking about).

At least that's mostly spared us all the heavy Brexit-related scaremongering and 'can Brexit be averted?'-pushing which marked out most of last week's editions of Newsnight.

The one huge exception came on last night's edition in the form of a gloomy piece from Chris Cook, reporting the anti-Brexit doom-mongering of some senior university voices. (I wouldn't have expected anything less from Chris). "Brexit hits the universities" was the Newsnight website's headline...

...though Monday night's edition did have a bit more gloomy 'economic analysis' from the eternally-worried looking Newsnight newbie Helen Thomas (who Evan introduced as "Helen Thompson"!), heralding by Evan and his talk of "clear uncertainty" for business. Helen duly talked of business confidence "cratering" post-Brexit.

Here she is, wearing her usual Newsnight expression. (Doesn't she like her new job? Or is it a case of a Europhile former FT journalist-turned BBC journalist (like Chris Cook) suffering a bad case of PRS (Post-Referendum Stress disorder)? Whatever it is, I think she needs to be given a box of chocolates, or flowers, or a boxed set of Eddie Izzard, or something, to lift her spirits, poor thing): 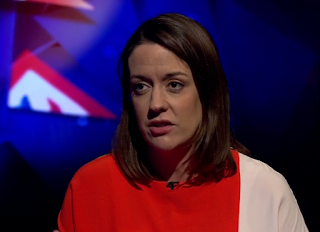 What I'm still waiting for is something which begins to seriously address the most important issue in the UK at the moment: Given that we've voted to leave the EU and, therefore, will be leaving the EU sometime soon, how should we best make Brexit work for us?

That's hardly an unreasonable request, is it?

It's not even as if I'm asking for something positive about the pro-Brexit vote (perish the thought at the BBC!)

I'm trying not to 'expand' too much, so I'll be brief and hope you have the time to quickly catch up on the relevant editions:

Monday's edition discussed the future of UKIP with three UKIP people.  Evan Davis began by asking them to say whether they'd be standing to replace Nigel Farage. He then moved onto his main question. Can you guess what that was? I bet you can. And, yes, you're right: It was about UKIP's tone, Nigel Farage's language, and that poster. Only after that did Evan ask about the future direction of UKIP. (At least he didn't mention Paddington Bear this time).

It also had a piece by divorce expert Ayesha Vardag on the 'breaking up' aspect of Brexit. From Ayesha's piece I wasn't wholly surprised to find that she's just posted a piece for the Telegraph headlined: I voted for Brexit, but now I regret the terrifying chaos I have unleashed. 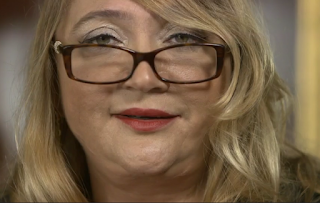 Watch, see and compare for yourselves just what he asked pro-Andrea Tim and what he asked pro-Theresa David. I'll just say that Evan asked two clear-as-a-bell and very unhelpful questions to Tim Loughton but just asked one, bizarrely mangled question to David Davis.

Quotes would doubtless help here, but I've not got the time.

Basically, the questions to pro-Andrea Tim focused on her personal history and tried to paint her as 'Establishment' while the question to pro-Theresa David said that she'd been in office for a long time and had made many failures relating to the defeat of the Remain campaign...

Oh, I'm probably going to have to quote that after all:

(To David Davis, about Theresa May): Your candidate has been in office for so many years and associated with all sorts of failures that are associated with the defeat of the referendum campaign on whose side she was.

And, keeping on quoting, compare that convoluted and barely comprehensible question to Evan's sharp questions to the other side:

(To Tim Loughton, about Andrea Leadsom): Let's start with you, Tim. Andrea Leadsom - investment banker, City worker...I think she went to Warwick. She was a member of a black-tie dining club. She was with The Patricians. You were a member of it, I think....[Mr Laughton said he was no such thing and didn't think Mrs, Leadsom was either].

(To Tim Loughton, interrupting, about Andrea Leadsom): Is it fair to say that an investment banker is the candidate is....?

Evan's earlier line of questioning, to all and sundry, had repeatedly floated the idea that Mrs. May's large vote of Conservative MPs was so convincing that the other contenders had probably best stand down. (Agenda? What agenda?)


Newsnight is still not doing itself any favours with a huge swathe of the viewing population (very few of whom watch Newsnight, whether part of the 52% or the 48%).
Posted by Craig at 22:03