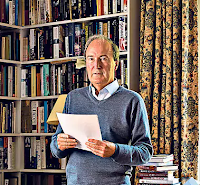 Alan at Biased BBC poses me an interesting question: Was Charles Moore correct to claim, during his spat over BBC Brexit bias with Jonathan Dimbleby (and the usual booing AQ audience) on Any Questions today, that the BBC uses the phrase 'despite Brexit' "whenever there’s a business story on the BBC"? Or was Jonathan Dimbleby right to cast doubt on his assertion and demand proof?

Well, I have been half-keeping my eye on this ever since the referendum - and ever since people I like began claiming that the BBC was using the phrase 'despite Brexit' a lot - and I've found very few BBC News website cases where the BBC uses the specific form of words 'despite Brexit'.

The fact is that there's been a heck of a lot of 'despite Brexit' reporting from the BBC but very little use of the actual phrase itself.

As Alan notes though, that form of words isn't the only form of words used. He's spotted examples of that, and I've also heard many a turn of phrase that means or suggests 'despite Brexit' but never specifically uses the precise words 'despite Brexit', plus many a report that implies as much without ever using equivalent turns of phrases.

I've harboured the suspicion for a while (a sensible suspicion I believe) that the BBC spotted all the complaints about the BBC's 'despite Brexit' reporting in the weeks immediately after the referendum result - specifically the multitude of claims that the BBC was actually using that very phrase - and warned their staff against ever using that form of words again, knowing that people would be monitoring them closely for their use of that phrase and would make hay with any such evidence that they were using it a lot. (And if I'd found it, yes, I would have made hay with it!) The BBC is constantly doing things like that, with their endless style guides, memos and meetings about language.

Of course, there have been examples of the BBC using it on air and on official BBC Twitter feeds but the BBC is very good at enforcing language rules and their reporters/presenters are very good at following 'suggestions' when it comes to such matters.

So despite the vast amount of 'despite Brexit' reporting that the BBC has put out in the light of recent decent economic news (etc), Jonathan Dimbleby doubtless felt completely confident in making that challenge to Charles Moore, knowing that Mr Moore wouldn't be able to provide enough examples to back up his point if the challenge was confined to finding specific uses of the exact phrase 'despite Brexit'.

Despite that, Mr Moore was correct in the broad point he was making.

Give the BBC any flotsam or jetsam to cling onto though - such as by claiming that the BBC uses the phrase 'despite Brexit' "whenever there’s a business story on the BBC" - and they will grab onto it and whack you over the head with it without mercy.

If that deflects attention away from the real essence of the point you are making, all the better for them.

P.S. For proof that Charles Moore is correct in the broad point he was making you only need to read News-watch's Today business news report which showed that pretty much everything they said amounted to things being 'despite' or 'because of' Brexit.
Posted by Craig at 19:45