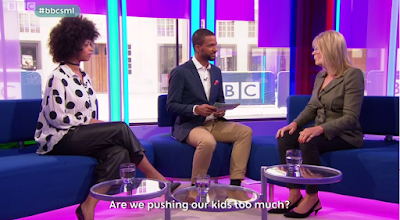 In other Sunday morning-related news, Sunday Morning Live had a very odd discussion on the question, 'Is religion dying out in Britain?' It was odd because there were 5 religious people on the panel (or on the video screen) who think it isn't and just one humanist who thinks it is.

You can usually tell who's putting the 'unpopular' view on a BBC programme like this though, even when the panels are balanced. They tend to get challenged more by the presenter. Here the chap who thinks drinking alcohol is far less harmful than some people claim found himself on the receiving end of Sean Fletcher's sharpest challenges and, later, Kathy Gyngell of The Conservative Woman got the full interruption treatment from young Sean for espousing socially conservative views on the family. She also endured Sean telling her that people on Twitter will be thinking, "You are from another era", as they heard her views. (Charming!)
Posted by Craig at 14:14