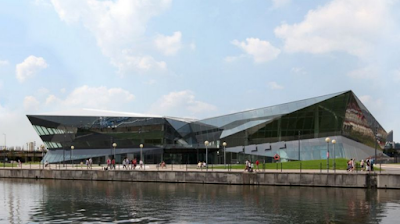 This story caught my eye the other day:

City Hall to relocate from central London to the East End

Sadiq Khan is to move London's government from City Hall to a new headquarters in the east of the city.

The Crystal building in the Royal Docks in Newham will become the home of the mayor and the Greater London Authority (GLA) at the end of next year.

The Crystal was opened in 2012 by electronics giant Siemens which cited it as an exemplar of sustainable design.

The Crystal is close to a new station on the Crossrail route - though the Elizabeth Line, as it will be known, is not currently due to open until 2022. The glass building has less capacity than City Hall and some GLA staff will instead be relocated to the London Fire Brigade's headquarters in Union Street, Southwark.

Millions of pounds will have to be spent to upgrade security for the mayor and members of the London Assembly.

The mayor told the London Assembly recently that the move was necessary because of government under-funding.

Moving London's government from its central location to a site in Newham to the east of the capital has been criticised by some as likely to diminish its role and status.

Others - including Labour-run Newham council - maintain it will spur the regeneration of one of the poorest parts of the capital.

Now here’s the rub - a news story running in parallel to the above, but studiously ignored by the BBC:

Piracy by the Mayor Of London

Extracts again give the gist of the story, and the sense of injustice felt by one of Newham’s small business owners:

What if we told you that Sadiq Khan, the elected Mayor Of London, has been willfully abusing his power in public office by illegally evicting a legitimate company from its premises, illegally taking over its businesses, administration office, plant machinery and equipment, and hijacking a marina and boatyard, only to hand it all over to the Royal Docks Management Authority (RoDMA), one of his Mayoral/GLA-funded companies – stealing all the company’s contracted clients in the process?

You’d naturally assume that this is a made up story, right? As a matter of fact, this actually happened at 10.49am on 9 October 2018 to a family run business in East London: Gallions Point Marina Ltd, when the GLA, controlled by the Mayor Of London, ordered an eviction without giving any notice. Four High Court bailiffs, 20 private security guards and four security dog unit vans brutally and forcefully evicted two female members of staff from the marina’s administration office.

Leigh Miller was assaulted by the GLA’s private security in the presence of the police (incidentally the staff called the Police to assist their help in stopping the illegal eviction!) as she went to access where she lives to retrieve a few essential personal possessions: handbag containing prescription medication, ID cash card and some clothes.

It was clear GLA’s private security had been pre briefed to deny Leigh to access to her home to retrieve even a single item. She was left standing with nothing but the clothes on her back. Leigh went back to the Marina in the evening to try and retrieve her medication and a few personal items and was physically assaulted for a second time by GLA’s private security. Who duly informed her that the GLA had instructed them under no circumstances were they to allow Leigh to access any of her personal possessions.

These events raise more worrying questions about the ex-human rights lawyer Sadiq Khan, now the Mayor Of London who completely ignored Leigh Millers basic human rights during this illegal eviction. And more even questions by using the Met Police to enforce illegal evictions. Estimated cost of this outrageous exercise to the public purse: £30,000.

Since 2016, Gallions Point Marina has been locked in an ongoing legal fight with the Mayor Of London, who is using the might and finance of three publicly funded authorities – GLA, TFL and RoDMA – to smother with litigation the Miller family who own the marina business.