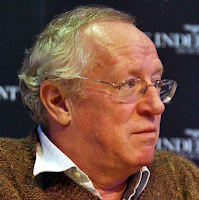 Talking about The Critic, I read a striking denunciation there yesterday from Oz Katerji. It was one last fisking, so to speak - of the late Independent foreign correspondent Robert Fisk.
The piece's headline, Fabricator and fraudster, sums it up what Oz thinks of Mr Fisk - though he later adds "fantasist" as well.
In a nutshell, Oz Katerji believes that Bob Fisk was an unethical anti-American/anti-Israeli propagandist who built a successful career by making things up and getting away it, and he's aghast at the "veneration" displayed in some of the obituaries of him.
The BBC was one of those who gave him what Oz would probably regard as a whitewashed obituary, with Jeremy Bowen  - a self-declared "admirer" - leading the eulogy.
(Anti-Israel Jeremy and anti-Israel Bob always mutually admired each other).
Oz Katerji puts the "veneration" of Robert Fisk down to the fact that "like him, they preferred to tell a story that was not true, because stories are often far more comforting than the reality."
One passage in the Critic piece struck me in the light of the BBC's obituary. The BBC, while saying how "highly regarded",  says, in passing: "Fisk, an Arabic speaker". Oz regards that as fake news:

So let’s separate the myths from the facts. Fisk did not speak fluent Arabic, not even after living in the Middle East for more than 40 years. Leaving aside the testimony of Arabic speakers who worked alongside him, his lack of basic knowledge of the language is contained multiple times within his own work, such as his inability to tell the difference between the words “mother” and “nation” in a well-known Ba’athist slogan.

One for the BBC's fact checkers?