Can things get any crazier? 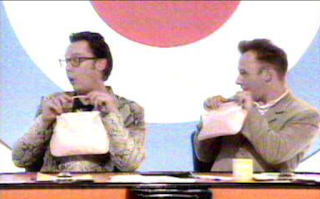 We're well past the stage where even the daftest surrender to 'woke' sentiment by the BBC is beyond belief, but tonight's news comes close.
The Sun reports that BBC football pundit Steve 'Tommo' Thompson has been suspended for describing a scuffle between two players as "handbags" - as in "handbags at dawn", one of those phrases footballers and football pundits have been using, week in and week out, for years.
There were complaints. (From handbags?)
The corporation said, “After listeners raised concerns, Steve acknowledged some of his comments on air didn’t meet the standards we expect. He is taking a break but will be back in the New Year.”
Is there no end to the BBC's pandering to this malevolent lunacy?
(Hope that doesn't offend the malevolent community).
Posted by Craig at 22:49