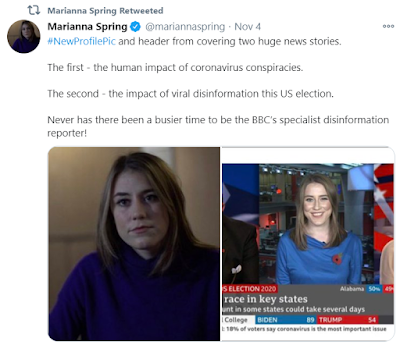 Marianna Spring is the BBC's specialist reporter covering disinformation and social media, and she's never been off the BBC's airwaves in recent months.

(Is she their busiest reporter?)

Her very active Twitter feed amuses me. It largely consists of photos and videos of herself. So much so that I've awarded her the nickname 'The BBC's Selfie Queen'.

And she surpassed herself yesterday by posting nine images of herself in a single tweet: 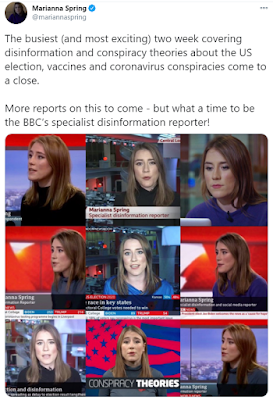 The remarkable thing about her, especially given that she's young, is how much she knows.

Never was the phrase "a wise head on young shoulders" more appropriate. She knows so much she puts the late King Solomon and the Encyclopedia Britannica to shame.

The English scientist, researcher, physician and polymath Thomas Young (1773-1829) is usually considered "the last person to know everything" - i.e. to be familiar with virtually all the contemporary Western academic knowledge at that point in history. But now we have Marianna Spring.

Whether it's to do with US electoral fraud, Covid 19, vaccines, you name it, she's knows what's true and what isn't.

She knows so much for certain, across so many fields of expertise, that the BBC should consider cutting hundreds more reporters' jobs and just let her do everything instead.

Plus that way we'd also get to see even more of her.

And we'll surely all drink to that! 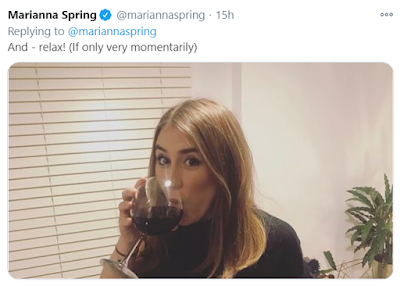 Update: Guest Who was thinking the same as me (?).
I also suspect the hand of BBC Trending boss Mike Wendling - or, on thinking about it, even more likely, somebody above him - in encouraging Marianna Spring to heavily promote herself as the youthful public face of the BBC's specialist disinformation unit, and to do so by putting that face of hers on pretty much everything she posts.
(And it also crossed my mind that Ash Sarkar might be feeling jealous as a result. It used to be her job to be ubiquitous at the BBC!)
Posted by Craig at 12:55