The night is passed and the day is at hand. Let us therefore cast off the works of darkness and put on the armour of light. Let us walk honestly, as in the day. 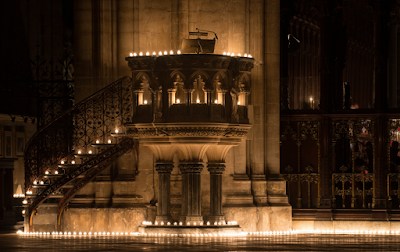 Story time...
The first Sunday in Advent, for Christians, is when a candle is lit for a world wound in woe.
The first Sunday in Advent - the one on BBC Radio 4 today - give us a world wound in woe and woke, and no candle whatsoever.
Racism, transgender issues, the foreign aid budget, etc, were all present and correct.
In fact, the programme approached self-parody this week: It gave us 40 mins of the usual dreary, worthy, 'liberal' handwringing before ending with a very jolly chap singing Ding, Dong, Merrily On High!
The programme climaxed in a show trial.
A socially conservative Christian organisation was in the dock. (Not that anyone from the organisation was actually present. It was tried and convicted in absentia.)
What had that socially conservative Christian organisation done wrong? Well, it had put out a video which misgendered someone.
The unhappily misgendered trans man was duly interviewed by Sunday.
He kindly granted that socially conservative voices shouldn't be silenced, but...
The "but" was, of course, that in this case - and all such cases like it - such people should be silenced. Or else.
And then came a nice, waffling Anglican bishop. The poor man was hauled in and placed in the dock in lieu of the condemned-but-absent Christian organisation.
The Bishop of Coventry, bless him, was completely incomprehensible. (Rowan Atkinson couldn't have made him up.) He bowed and curtsied to the unfortunate misgendered chap but said little else that made sense, and presenter William Crawley got frustrated with him.
William's a true pro though. He stuck to Sunday's guns and pushed the bishop to condemn the head of the socially conservative Christian charity - a lady who also sits on the Church of England's General Synod. William's line of questioning was: Why is she still on the General Synod? Shouldn't disciplinary action be taken against her?
The bishop waffled and said nothing that anyone other than God could possibly understand.
Blog favourite Jane Kelly of The Salisbury Review/The Conservative Woman sums it all up:

Sunday was truly outrageous today, suggesting any criticism of transgendered men should be silence in case it 'gives offence.'

It won the programme plaudits from a few Twitter folk though.

Meanwhile, this week's Sunday also contained yet another plug for a book written or co-written by someone from the left-leaning Catholic magazine The Tablet, of which Sunday's main presenter Ed Stourton remains a trustee.

I've counted four such book plugs for senior Tablet folk, past and present, in the past couple of months.

Still, at least the Advent edition of Sunday Worship that followed featured one of my favourite choral pieces - Ubi Caritas by the French composer Maurice Duruflé. Unfortunately, the reader talked all over it. So, to make up for that, here's the full thing - uninterrupted: