Jon Sopel takes umbrage after somebody is "sarcastic" at his expense


After listening to Jon Sopel on this morning's Today, Tim Montgomerie put finger to mobile phone and tweeted:

Tim Montgomerie: Could the BBC's Jon Sopel have been more gushing about Biden’s team?

That didn't go down well with Jon Sopel:

Jon Sopel: Just woken up to this Tim. What utter crap. Have just listened back. I say they are small c conservative, technocratic, unflashy and more diverse. I use no adjective - approving or disapproving. I’m asked what stands out. I answer. Without any gush.

Tim Montgomerie: You’ve endlessly critiqued Trump (often fairly) but critical faculties have been suspended over Biden. You would have found many negative things to say if you’d been asked what stood out about Trump nominees. It’s always Democrats good-Republicans bad on the BBC.

Jon Sopel: Just not good enough Tim. I was neither complimenting nor disparaging. You asked sarcastically if I could have been more gushing. Just give me one example where I ‘gushed’. If you can’t maybe  you’d reconsider the tweet.

Tim Montgomerie: Any half-decent report would have referred too how this was a throwback to the Obama years when Russia, China, Syria and Iran were all emboldened. Instead you gushed about how diverse it was. No apology from me.

I think we can adjudicate as to who's right here: I've transcribed the section in question and I think it shows that Tim Montgomerie is absolutely spot-on in his criticisms of Jon Sopel.

For starters, let's take Jon's claim "I use no adjective - approving or disapproving". Really? What about "very reassuring" and "incredibly smart"?

And, yes, Jon did "gush about how diverse it was", while using contrasting adjectives about the first Trump cabinet: "white, old and wealthy".

It's a sign of where we are that Jon Sopel could say what he said today and think it's outrageous that anyone would find it biased. What he said is biased!

Mishal Husain: What about the future Biden team, Jon? More names emerging. Who are the most striking to you, and what do they suggest about the new administration?

Jon Sopel: I suppose you'd say Tony Blinken becoming the Secretary of State. I think a lot of Europeans will find him a very reassuring figure. He's an internationalist. He's outward-looking. He supports the rights of refugees. It is a return to a normalcy of US foreign policy that has been a consistent line, if you like, since the Second World War that was broken with the Trump administration. So I think Tony Blinken is one. Jake Sullivan? I think incredibly smart, young National Security Adviser, who was a very close advisor to Hillary Clinton. And Janet Yellen, who was Chairman of the Federal Reserve, becomes the first woman to be Treasury Secretary. And I think what you're seeing in these appointments is a sort of small c conservatism. They are technocrats mainly. They are not flashy big name egos who will cause Biden trouble. It is all part of his bid that "I am here to unify the country, to get on with the job, and I want people who are capable to deliver it". In that sense you would say 'small c conservative'. But in another way you would say 'quite radical', because there is much, much more diversity. There will be the first woman who's going to be Director of National Intelligence. As I said, first woman who is going to be in charge of the Treasury department. There is going to be someone who is from a Cuban exile background to be Head of Homeland Security. And so you see a very different picture than the one that was gathered round Donald Trump's first cabinet table. which was white, old and wealthy. And I think Joe Biden is bringing in a much more diverse group. 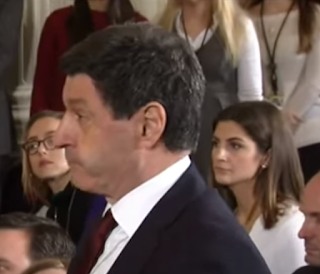