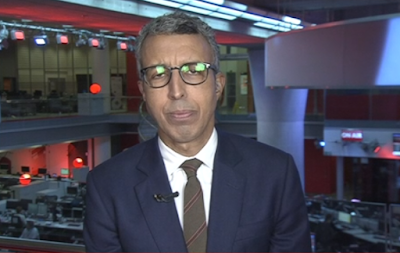 The main question on this week's Newswatch was: "What language is unacceptably racist for BBC News?".
Here we went down the rabbit hole and leaped through the looking-glass again.
In this week's (BBC) news:
(a) An Ulster Unionist peer had misspoken about Kamala Harris and "caused some outrage" by calling her "the Indian" [ed - maybe confusing her with Elizabeth Warren?]
and
(b) The Chairman of the Football Association, Greg Clarke, had to resign after using "an offensive and outdated term" to describe black players.
[ITBB Trigger warning: Please brace yourselves, and look away now if you can't face the word. The offensive word Mr Clarke used was "coloured".
Reminder: "Of color/Of colour" is acceptable and should be used at all times, but "coloured" is offensive and should never be used on any occasion.
I'm not sure about "colourful", as in "a colourful personality", but - so far - it seems OK].
And, as Samira mentioned, criticism of the BBC's reporting of both of these stories comes in the wake of this year's earlier furore after a well-meaning BBC reporter used the n-word in her report.
The context, not mentioned, was that the BBC report in question focused on a racist attack against a black man during which the n-word was used by his racist attacker and the white reporter used it in her report, with trigger warnings in advance, because the family of the black victim had wanted her to...
...yet a huge row blew up nonetheless, and a black BBC radio DJ resigned in protest because the n-word should never, never, never be used, regardless of context.
The BBC originally, rightly, defended its reporter but then caved in and grovelingly apologised - doubtless because the woke 'outrage' coincided with the height of the BLM wave in the middle of the year and the BBC (under the outgoing Lord Hall) was absolutely terrified of being seen as being on 'the wrong side' of those protests.
So the BBC (under the outgoing Lord Hall) threw their well-meaning reporter under a bus to appease 'the outraged' mob - especially the mob frothing away on Twitter.
That isn't how Samira and Kamal Ahmed recalled what happened - as you'll see...
Nevertheless, there's a rabbit hole to go down and a looking-glass to leap through, so here's the transcript:
******* 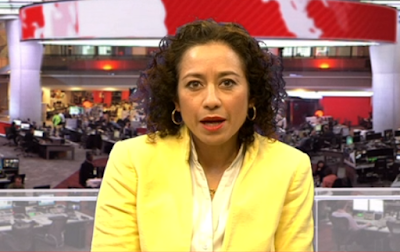 Samira Ahmed: Well, to discuss all this, let's speak to Kamal Ahmed, the Editorial Director for BBC News. Kamal, let's start with the two cases this week. The first one, with the peer referring to the US Vice President-elect as "The Indian". Now, the BBC described that as a "racist" tweet, with the word racist in quotation marks. Why?
Kamal Ahmed: Because they were quotes from parliamentarians and others about Lord Kilclooney's comments, and so we put them in quotes to show that they were attributed to other people who were criticising him. And also, in no way would they suggest that the BBC was passing any form of judgement on what was said, so we simply used the quotes to show that there is attribution and that those were criticisms of what Lord Kilclooney said.
Samira Ahmed: So, critics of him were describing the tweet as racist, and that's why the word racist was in quotes?
Kamal Ahmed: Yes.
Samira Ahmed: Then there's Greg Clarke, the chairman of the FA, who resigned after remarks BBC News reported there. They focused on this particular word he used to describe black players. We're not going to repeat it. We heard him saying it there. BBC described it as offensive language. Why use that word to describe it?
Kamal Ahmed: Many people consider the use of the word as offensive. And, clearly, he resigned after saying that the word was offensive and there was widespread agreement that the word that he used was offensive, so we were able to use that as a description of the word. And given that he resigned, he clearly realised that he had used the word inappropriately.
Samira Ahmed: Kamal, you and I are old enough to remember a time when that particular word was used quite widely in mainstream British society. It's offensive now. And one wonders, should the BBC be repeating it at all?
Kamal Ahmed: We obviously were allowed to use it once there, when he said it himself. So, we have quite in-depth discussions about these issues before we broadcast. And you have to get the correct balance between audience understanding of the story and also not causing gratuitous offence to audiences, and so it would have been difficult, we believe, for the audience to understand the story if we simply didn't use the clip of Greg Clarke saying the word at all. But also, you don't want to compound any offence by repeating the word over and over again in scripts or in cues before any packages are seen, so we agreed, after a wide discussion amongst editorial heads here, that we would use the clip once - to give context to the audience, what the word was - but we wouldn't overuse it and risk doubling the offence that could be caused.
Samira Ahmed: I suspect there are people watching right now who would be saying they don't find that word offensive. What would you say to them?
Kamal Ahmed: Well, the judgement we take is whether it is offensive to audiences. And there would be many audiences who would find that word offensive and we have to take care if that is the case. It doesn't mean that everyone needs to find it offensive before we make those judgements. And also, as I say, Greg Clarke resigned, so clearly there was an agreement that what he had said was inappropriate and offensive.
Samira Ahmed: This all comes after the summer in which the BBC broadcast the n-word in a news report about a racist attack, defended it for quite some time, but then apologised after a huge public outcry - which included a Radio 1 DJ resigning over the matter. Did the BBC give in to public pressure or did it get it wrong?
Kamal Ahmed: No, we agreed that we hadn't made the right decision at the outset, we apologised for that. There were in-depth discussions about the coverage of that story. It was a very, very important story about an horrific, racially aggravated assault, and it was reported in the way it was reported. We realised that that was a misstep and we apologised for it.
Samira Ahmed: You implied there'd been discussions, so has there been a rewriting to some extent of BBC editorial policy since then over how news deals with racially offensive language?
Kamal Ahmed: Yes. So, after that, as you suggest, we had discussions about how we can ensure that our guidelines were robust on these issues, and now we do have new guidelines in place on the most racially offensive slurs, and they are now automatically referred to the director of the division - in our case, the director of News, Fran Unsworth - and that means that we have robust systems in place to ensure that we don't misstep in that way again. There can be disputes around what was the intent of the use of certain words, and that's perfectly reasonable, and it's important that the BBC doesn't pass judgement on the motivations of people using words but making it clear that words are offensive.
Samira Ahmed: Kamal Ahmed, thank you.
Posted by Craig at 18:40