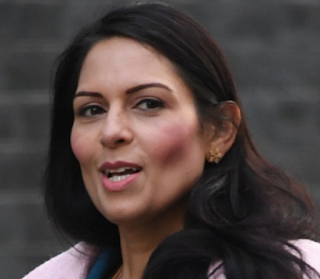 Before I went to bed last night I noticed that the BBC News website was leading with the summary of a draft report looking into allegations of bullying by Priti Patel.

At the time the BBC was alone in making this the main story, with neither Sky not ITV making it their lead story.

The curious thing, however, was that, whether it was the ITV News website or The Daily Telegraph, or the Sky News website or The Times, they all - to varying degrees - reported that the civil servants involved in the affair were also apportioned some share of the blame, not just Priti Patel.

Naturally, the right-leaning newspapers made more of the criticisms of civil servants than either ITV or Sky, but at least ITV and Sky reported that the findings aren't apparently all black-and-white.

Yet, as of 10pm last night, the BBC News website's main story was exclusively about how Ms Patel was said to be in the wrong

The story led BBC One's News at Ten but neither ITV nor Sky. And the BBC didn't mention the criticisms of the Civil Service at all.

ITV's News at Ten, in contrast, did mention that the report found that Ms Patel "lacked support" from civil servants and even Sky News reported that civil servants were "found to be working against their boss".

Why did the BBC omit this part of the story?

Here's a theory: Priti Patel was probably always set to be next in the BBC's firing line after Dominic Cummings's scalp had been taken.

Here's a transcript on last night's BBC One coverage of the story:

Newsreader: Tonight at Ten - a draft report into claims that the Home Secretary Priti Patel bullied staff concluded in the summer that she had broken rules on ministerial behaviour. An inquiry was launched in March after the most senior official at the Home Office resigned, alleging that staff felt Ms Patel "created fear" in the department.

Laura Kuenssberg: She always denied doing anything wrong, but after months of investigation into one of the most senior members of the government, tomorrow the Prime Minister Boris Johnson is poised to give his verdict.

Newsreader: Good evening. A draft report into claims that the Home Secretary Priti Patel had bullied staff concluded this summer that she had broken rules on ministerial behaviour. The Cabinet Office began an inquiry into her conduct after the most senior official at the Home Office, Sir Philip Rutnam, resigned in February. He alleged that staff felt she "created fear" in the department, and is suing the Home Office for unfair dismissal. Tonight Labour is demanding that the report be made public. A decision on Priti Patel's future will be made public tomorrow. Our political editor Laura Kuenssberg reports.

Laura Kuenssberg: She's the most powerful woman in the Cabinet, long-standing Brexiteer backer of Boris Johnson, in charge of the police, immigration, one of the most important jobs in the government, but since February there's been a shadow hanging over Priti Patel because of this Dramatic claims made by the man who was her most senior official:

Sir Philip Rutnam: I have received allegations that her conduct has included shouting and swearing, belittling people, making unreasonable and repeated demands, behaviour that created fear and needed some bravery to call out.

Laura Kuenssberg: He quit, but she wanted to stay, so the government launched an investigation into what really happened. And now, months on, perhaps it's starting to become clear. One source told me the draft report, concluded way back in the summer, says Priti Patel had not met the requirements of the ministerial code to treat civil servants with consideration and respect, and they said the investigation had found some evidence of bullying even if it was not intentional. Another source said the report was unambiguous that Priti Patel had broken the code, the rules that are meant to govern how ministers behave. Yet, for her part here at the Home Office, Priti Patel has always firmly denied doing anything wrong.

Reporter: Are you a workplace bully, Home Secretary?

Laura Kuenssberg: The reports looked at her behaviour in three different departments and one government source told me it doesn't always give a flattering picture of what Priti Patel encountered. The man who until recently was by the Prime Minister's side confirmed the findings have been in Boris Johnson's intray for a while, but implied that if Priti Patel was found to have broken the rules she might not have to quit.

Laura Kuenssberg: The expectation here tonight is that there might be some kind of reprimand for Ms Patel, but it's certainly not likely that she will be sacked and Tory MPs are already rallying before the Prime Minister's decision is even public.

Sir Iain Duncan Smith: I worked with Priti Patel for a number of years and I've always found her strong, robust, but never in any way anywhere near bullying or even threatening any of her staff and most of the staff got on with her incredibly well.

Laura Kuenssberg: Yet convention matters. There isn't a single example of a minister who has broken the rules who has stayed on.

Dave Penman, FDA union: What message does it send if the master says actually, although I said there will be no bullying, what I actually meant was a little bit of bullying is OK and it's not a breach of the ministerial code that requires a resignation. That's not the sort of message I think the Prime Minister, who is also the Minister for the Civil Service, wants to send to those thousands of civil servants.

Laura Kuenssberg: Priti Patel had to leave government in dramatic circumstances before, almost exactly three years ago departing as soon as she arrived home from a foreign trip after it emerged she had held unauthorised meetings with Israeli politicians. There may well not be an exit for her this time, but there's still a political drama. Sophie, let's be really clear about two things tonight. Number one, Priti Patel has always and repeatedly denied she did anything wrong. But number two, there is no precedent for a minister who has been found to have broken the code, the ministerial Charter, if you like, that's meant to govern how ministers behave, staying on their job if they have actually been found to have transgressed in any way. But after many, many months of all of this it's clear that this is reaching a crescendo, but it also seems tonight that the Prime Minister is very determined to try to stand by her. There's been a not very subtle attempt by Tory MPs all over social media tonight, posting so much about how they think she's the right person for the job, praising her to the skies. But we will know more tomorrow when we actually see the statements that emerge. After many months of being a problem for the government he will try to draw a line under it but I expect the Prime Minister still to try to hang on to her, there may well be questions how he can do so.

UPDATE (13:30): Within the last couple of hours, Laura K has tweeted, almost as a thread afterthought "Worth saying the report also makes unusual criticism of Home Office, says Patel didn't always receive support she should have from her officials".

She was some 15 hours behind everyone else, but she's arrived at last!

The Ministerial Code says "ministers should be professional in their working relationships with the civil service and treat all those with whom they come into contact with consideration and respect. I believe civil servants - particularly senior civil servants - should be expected to handle robust criticism but should not have to face behaviour that goes beyond that. The home secretary says that she puts great store by professional, open relationships. She is action orientated and can be direct. The home secretary has also become - justifiably in many instances - frustrated by the Home Office leadership's lack of responsiveness and the lack of support she felt in the Department for International Development (Dfid) three years ago. The evidence is that this has manifested itself in forceful expression, including some occasions of shouting and swearing. This may not be done intentionally to cause upset, but that has been the effect on some individuals. The Ministerial Code says that "harassing, bullying or other inappropriate or discriminating behaviour wherever it takes place is not consistent with the Ministerial Code". Definitions of harassment concern comments or actions relating to personal characteristics and there is no evidence from the Cabinet Office's work of any such behaviour by the Home Secretary. The definition of bullying adopted by the Civil Service accepts that legitimate, reasonable and constructive criticism of a worker's performance will not amount to bullying. It defines bullying as intimidating or insulting behaviour that makes an individual feel uncomfortable, frightened, less respected or put down. Instances of the behaviour reported to the Cabinet Office would meet such a definition. The Civil Service itself needs to reflect on its role during this period. The Home Office was not as flexible as it could have been in responding to the home secretary's requests and direction. She has - legitimately - not always felt supported by the department. In addition, no feedback was given to the home secretary of the impact of her behaviour, which meant she was unaware of issues that she could otherwise have addressed. My advice is that the home secretary has not consistently met the high standards required by the Ministerial Code of treating her civil servants with consideration and respect. Her approach on occasions has amounted to behaviour that can be described as bullying in terms of the impact felt by individuals. To that extent her behaviour has been in breach of the Ministerial Code, even if unintentionally. This conclusion needs to be seen in context. There is no evidence that she was aware of the impact of her behaviour, and no feedback was given to her at the time. The high pressure and demands of the role, in the Home Office, coupled with the need for more supportive leadership from top of the department has clearly been a contributory factor. In particular, I note the finding of different and more positive behaviour since these issues were raised with her.