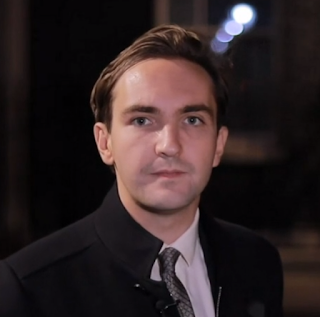 When does the political becomes personal?

When still at Sky News, Lewis Goodall famously had an extremely bruising six-minute encounter with Dominic Cummings during which Mr Cummings was - how shall we put it? - highly impolite to Lewis.

It's crossed my mind many times since that Lewis has pursued Dominic Cummings so mercilessly over the past year and more because of that humiliating encounter. I've suspected it must still strongly rankle with him.

So, the closing words of his Newsnight report last night struck me as being particularly revealing.

Referring to the departure of Donald Trump and Dominic Cummings, Lewis concluded, "This may be an interregnum for the politics of disruption, rather than an ending, but 2021, for all sorts of reasons, is looking to be more polite, all round."

Anyhow, here's a transcript of Lewis Goodall's op-ed piece last night in which, among other things, he endorsed claims (probably accurate) that Boris Johnson "a shape shifter":

It has been an age of disruption, of old certainties fading, as if politics were smelted down and being cast anew. But if ever there were a counterrevolution it is surely this, emerging before our eyes. The glimmers of the old order re-emerging, with that order maybe claiming the scalp of our own Downing Street Jacobin. The architect of so much of the revolution of recent years, Dominic Cummings. His party says it is time to move on.

But Brexit isn't done yet and it is here that Cummings' absence attracts most feverish attention. Sources in the EU read this as a Prime Minister heading for a crunch week, who is about to back down. It is possible, but others are more cautious.

It may be the end of an era, but in some ways it isn't the departure of Cummings himself that matters most, but that of Donald Trump's. This week a former Democratic White House official lambasted Johnson's congratulations to Joe Biden, calling him "a shape shifter". It was meant as an insult but in many ways that is precisely what Boris Johnson is. He has shifted his political form again and again, from liberal Mayor of London to born-again populist. It is possible that it is happening once more.

Johnson is already preparing for this new Biden-led world. I'm told that we should expect a significant speech on climate change from the Prime Minister in the coming weeks. But as for the rest of policy, Cummings or not, there is a huge question mark. The question on everyone's lips is what difference to policy a Johnson government absent Cummings will make and the answer is, well, it will be quite difficult to tell, because on a whole array of domestic issues it is not as if Dominic Cummings or Johnson have developed comprehensive new sets of proposals. Now, part of that of course is the pandemic, but part of it is also the story of a premiership which still lacks definition, which beyond the fact of Brexit and the talk of levelling up still hasn't articulated how it will begin to achieve many of its aims. But what there probably will be without Cummings is a change in tone, an end to the politics of the permanent war footing. This may be an interregnum for the politics of disruption, rather than an ending, but 2021, for all sorts of reasons, is looking to be more polite, all round. 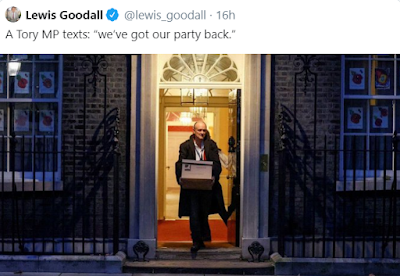 ....received a fair few variations on this particular theme:

Really shouldn't need saying but maybe, just maybe, just a little bit of a maybe, the Tory MP texting Lewis Goodall might not be the most representative of their colleagues or their members or their voters.

That was a polite one.