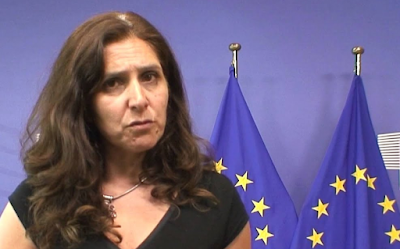 In a former blogging life I repeatedly railed against pro-EU bias on an obscure BBC programme called The Record Europe.

It was meant to be a flagship programme for the BBC's EU coverage, even though they tucked it away on the Parliament Channel, and was mostly broadcast from the European Parliament (Strasburg or Brussels, depending).

Even by the standards of its time, its pro-EU bias was absolutely off the scale.

Its presenter - Shirin Wheeler (daughter of Charles) - never bothered to disguise her disdain for Euroscepticism and Eurosceptics.

Even the mildest of Tory Eurosceptics would get the full Shirin treatment, and Allah help any genuine Tory Eurosceptic or Ukipper who found themselves at her mercy in the studio. She would interrupt and contradict them mercilessly while openly siding with her pro-EU guests.

The programme eventually got cancelled, and I then lost sight of Shirin.

Yesterday, reading a review of her sister Marina's book in The Times, I remembered her and Googled her. And guess what?

Yes, this former BBC Brussels correspondent turned biased presenter went on to become what she still is now: 'Leader Advisor' to the European Union's bank.

She now openly promotes herself on Twitter as a "proud Europhile" under the 'handle' shirinwheelerEU.

Colour me astonished (not)!

And the point of all this is that while she was presenting this prestigious BBC programme at the turn of the last decade, apparently, showcasing the BBC's EU coverage, Shirin Wheeler could not have tried less to hide her passionate pro-EU bias.

And she was allowed to get away with it by the BBC....

....well, at least till they cancelled her programme.

Curious thought. Did all my endless posts laying out the evidence of bias in HUGE detail, week in and week out, help speed its cancellation?

It's not impossible. The bias was so off-the-scale that I'm sure even the BBC must  have realised, behind the scenes, just how in-your-face it was.