The end of populism?

From John Simpson's interview with Geeta Guru-Murthy this lunchtime, it looks as if the BBC believes that the 'populist balloon' (as John Simpson put it) has burst:

Geeta Guru-Murthy: With me is our world affairs editor, John Simpson. Obviously, nothing is confirmed yet, but if this is the end of the Trump era, how would you reflect on this? Has this been an aberration in a sense within the US democracy or a sign of very changing politics?

John Simpson: There has been a change in politics, otherwise Trump could not have been elected in the first place and wouldn't have stayed there. I think this looks as though this is the end of a very, very turbulent and difficult period, not just in America but around the world. NATO has suffered terribly over the last four years. America's relationship with other countries has suffered very, very badly. I think the first thing Joe Biden will do, assuming he does become President, is to get on the phone to all the NATO leaders and try to kind of win them back into the fold. Of course, he will be talking to Britain about Brexit too.

Geeta Guru-Murthy: You have met Biden, what kind of man is he?

John Simpson: He is very much an American politician. I mean, he looks good and looks are kind of the most important thing, in some ways, at that kind of level. I would say, he is not like Clinton, a sort of brilliant intellectual, or Obama himself whom he served under. But he is bright. He knows how to argue a case. But the key thing I think about him is that he is instinctively a kind of agreement man. He's promised already to reach across the aisle to Republicans. He did that in the past. He was actually doing that when I actually met him, in 1995 I think it was. He has got real abilities to win over people of different political persuasions.

Geeta Guru-Murthy: He does have an extraordinary personal back story. How much does that matter in US politics?

John Simpson: I think it does matter a lot. It matters mostly in the way that ordinary people relate to him, and it is possibly easier to relate to Biden, the man who grew up with a bad stutter, a working-class or lower-middle-class background who made spectacularly good. The Irishness of his background. All of these things are attractive to American voters.

Geeta Guru-Murthy: When we look at where we are now, obviously still in a very fragile state within the race position. Trump obviously does not look like he wants to concede. Lots of comparisons and fears about authoritarian instincts. You have met and covered many real authoritarian regimes, how would you put the current state of democracy? Is it fragile in the US or not?

John Simpson: I personally don't think it is fragile at all. I think a country that can absorb four years of the most disruptive and least controlled president in its history and can have an election in which he is voted out, not by a very large majority, is a country with a very strong system indeed. It looks chaotic. The Chinese and Russians both loved it, and they say is this the kind of system that you want? But in fact it will work. It will produce a new president. And I think, after a while Trumpism will start to fade.

Geeta Guru-Murthy: What does that mean for other leaders here? We mentioned Brexit, Boris Johnson, seen as allied in style and political instincts, to a degree, with Trump. Will that reflect badly on the current British government? Will it bode ill for a potential trade deal?

John Simpson: Joe Biden really doesn't like Boris Johnson, and he said some quite hostile things about him. He certainly doesn't like Brexit. At the same time, I think is actually an Anglophile. I think we will see him judging everything to do with Britain and Brexit through the prism of Ireland - how it affects Ireland, how bad it will be for Ireland if, for instance, there is a no-deal Brexit. Personally I think that now that Biden seems to be coming in, I think we will hear a lot less about a no-deal Brexit because I think America would really set its face against that. Presumably, there will be a trade agreement between Britain and America, because there has been probably on very much the lines already negotiated.

Geeta Guru-Murthy: In a broader way, if Trump goes, we still haven't had it confirmed of course, does it change the way, the style of leadership, not only for Boris Johnson but for Bolsonaro or for Modi, or for others who have developed a certain brand of politics?

John Simpson: I think the key to that kind of populist government will have vanished. I think if Trump...Everybody, every populist - I'm not really including Boris Johnson in this because I don't think he is entirely a populist - but people like Bolsonaro, for instance, they are only there because Trump was there. With Trump gone, I think the gas goes out of the balloon as far as they are concerned. Britain I think is entirely in a different position, but the Johnson government is going to have to find a way of coming to terms with the Biden government, a very different government from the one it has been used to.

Geeta Guru-Murthy: China, of course, a lot of questions whether Biden will take a gentler stance towards China, but the Democrats also have got major concerns. haven't they, on that front?

John Simpson: Biden has said he won't be softer on China and I don't see how he could be. I think in that respect, Donald Trump has kind of establish new sets of goalposts, and I think it would be impossible for Joe Biden to go back to a gentler, easier, more friendly relationship with China. I think he's got to be as firm as Donald Trump, otherwise he will look weak. And the same will have to be true of Russia too.

Geeta Guru-Murthy: Finally, what have you made of the last roller-coaster few days? It's been nail-biting to watch, hasn't it? How big a shift is it?

John Simpson: I saw the 2000 election, I was there in Florida. That was nail-biting. But I haven't got an awful lot of nails left, really. 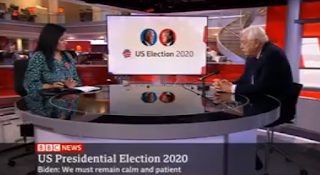 If they think that Donald Trump losing by a small margin but also picking up 7-8 million more votes than he picked up in 2016 means the beginning of the end for Trumpism then it sounds as if they're closing their ears.

And if they think it means the end of populism, with the aforementioned Mr Bolsonaro still remaining quite popular and Mr Modi remaining exceptionally popular, then they are surely engaging in wishful thinking.