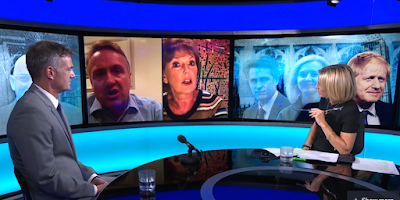 When watching the TV or listening to the radio, I especially don't enjoy it when broadcasters set up 2-against-1 discussions/debates on a controversial subject.
It doesn't feel fair to me.
Even worse is when the host of the programme takes the invited majority side and makes it 3-against-1.
And my hackles really rise if that host then sends the bias sky-rocketing by either mainly or exclusively interrupting the one and only, single and unique dissenting voice, making it 3-against-1 with an added power imbalance against the 1.
And I find that grossly rude.
So let me confess:
In first getting acquainted with GB News a while back, I was heavily disappointed to find GB News host Dan Wootton doing that very thing on a matter of controversy.
It was 2-against-1 guests, made 3-against-1 by Dan himself sharing the same view of the 2 against the 1, then Dan going after the lone dissenting 1 with contradictions and questions...
...and I thought to myself, ''I don't think I want to escape the BBC just to end up with a mirror image of the BBC - even if it's slightly better because its biased host isn't pretending to be impartial'' [or words to that effect].
And I wasn't thinking that because I agreed with the harassed dissenter.
Far from it. In the discussion, I agreed with the 3 against the 1 and didn't particularly like the 1, who I felt wasn't right.
It just felt wrong though.
----------------------
And I've held that view for about a month now regarding parts of GB News's output, but now I'm starting to think again...
My new thought is: Given how the BBC is, is that reasonable? Maybe a mirror image of it it necessary after all, especially as the BBC is publicly-funded and getting away with murder?
----------------------
And what provoked that re-think was last night's publicly-funded Newsnight on BBC Two.
This was the first discussion about Boris's reshuffle, hosted by Emily Maitlis.
It was a classic biased BBC discussion.
It featured two Boris critics - Peter Kyle, Labour's Shadow Schools Minister, and someone Emily introduced as ''former Cabinet minister, now outspoken critic of this PM'' Anna Soubry - pitted against just one Boris supporter, Charles Walker, briefly former leader of the 1922 Committee.
That's Stage One.
The obvious question already is: Why not just feature one guest from each side? Why not, say, just have either Mr Kyle or Ms Soubry face off against Mr Walker? Why stack it against Mr Walker with a 2-against-1 situation?
Then came Stage Two, as the biased host entered stage left, and intervened most aggressively against the single, dissenting voice - here Charles Walker.
It was 3-against-1 time again,
Yes, it was pure Dan Wootton on GB News again, but from the opposite direction while - far worse - pretending to be impartial.
---------------------- 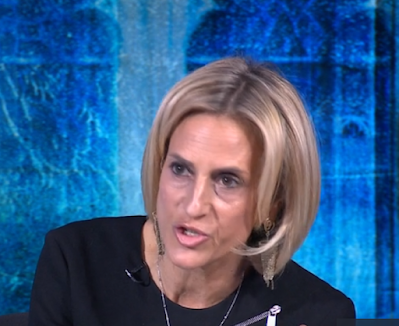 Ironies abounded.
It began with Labour's Mr Kyle being given a long, free run to attack the Government. He got 1m 4s of uninterrupted ranting.
Then pro-Boris Charles Walker was brought in and Emily asked him about there being ''very little diversity of opinion'' in the new cabinet - which, in the first irony, is particularly rich coming from the present Newsnight team of left-liberal thinkalikes who think nothing of repeatedly labelling Nadine Dorries - the new culture secretary - a ''social conservative'' [as they did at least twice last night].
Hilariously, Mr Walker then 'did a June Sarpong' and replied listing all the racially diverse members of the present cabinet, and Emily - repeatedly interrupting him - told him, as if it was wrong, that he was ''talking about race'' rather than diversity of opinion [O irony upon irony!] - something Emily didn't want to do here but which Newsnight would undoubtedly have done if given even the remotest chance...
...except that they are famously one of the whitest, most right-on broadcasting teams at the BBC and that the Government puts them to shame as far as the identity politics 'putting diverse people in the top jobs' front goes.
Charles Walker barely got a sentence out before being quickly and repeatedly interrupted and contradicted by Emily, who seemed to be gunning for him. Her first interruption came 9 seconds into his first answer. [Note the contrast with Mr Kyle].
Anna Soubry was then brought in and soon fell out with Mr Walker. Ms Soubry said, ''Could you let me finish? You've spoken an awful lot, Charles'' - even though he hadn't been allowed to speak much at all.
I've counted it up and he got the same amount of time, prior to Anna entering, than Labour's Mr Kyle [around 1m 10s each] - though Peter Kyle got his free run while Charles Walker had to bat off Emily Maitlis's targetted-to-him questions and interruptions. And Anna went on to get plenty too.
Mr Walker, his hackles rising, asked why she was even on, given that she's no longer a member of Parliament. It's a good question, though we can easily guess the answer. Emily replied that she ''actually'' has ''been in cabinet''. Mr Walker replied that Ms Soubry ''wasn't in cabinet''.
''Let her finish her sentence, please,'' said Emily to Charles around this time - which was ironic given that Emily had repeatedly interrupted his sentences earlier.
Anna Soubry, of course, unlike Charles, wasn't interrupted by Emily after 9s. She was also given free rein, only stopped by Charles Walker interrupting her.
Anna then continued again, at length, ranting against Nadine Dorries. Emily let her finish her sentences. And on Anna Soubry was allowed to go, for an entire minute, raging against the new culture secretary.
Charles Walker then defended Nadine Dorries and slammed Anna Soubry for not being ''nice'' - a section ending in all three guests speaking at the same time.
Emily then went on the attack against Charles Walker, gunning for him again.
And Emily then did the BBC thing of playing devil's advocate for the one and only time, asking the Labour man a  half-hearted question about about how Boris is ''getting stuff done'' and doesn't looked ''scared of your party''.  Mr Kyle then delivered another long rant with the shortest interruption midway from Emily. And then Anna was given another long go. And then Mr Kyle returned again to add to his rant.
And finally Charles Walker was asked a long, complicated, heavily loaded by Emily - one with half a dozen questions embedded in it. He answered briefly. Then Mr Kyle leaped in and slagged off Michael Gove, uninterrupted.
And that was that.
-----------------------
And after that, frankly, please give me openly biased Dan Wootton over 'claims to be impartial' Emily Mailis any day.
It's the pretence of impartiality whilst being any but that really, deeply sticks in the throat.
Posted by Craig at 18:11