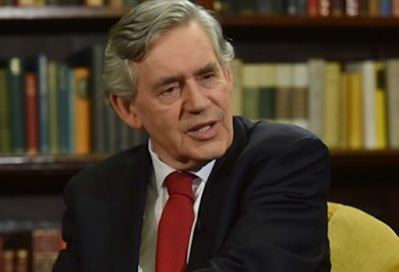 This blog started with a series a posts detailing patterns of bias on BBC Radio 4's weekly 'politically left-of-centre and socially liberal' religion-focused Sunday programme.
And here's a new one: They like giving Gordon Brown a platform to promote his causes.
Despite it being a weekly programme featuring very few politicians, the son of the manse has been granted the Sunday bully pulpit no less than three times over the past year, pushing his agenda with the BBC's help.
Last October he was on demanding that the government 'must act to prevent the loss of a million young people to the job market'.
This May he was on advocating for G7 leaders to 'prioritise vaccines for developing countries ahead of the G7 summit'.
And today he was back saying that world leaders need to act now to end the 'moral outrage' that 'rich countries are amassing huge stockpiles of Covid vaccines they don't need'.
It's all very Sunday. In the years that I've covered them, they've always had their favourites and put them centre-stage.
And that Crash Gordon is now their living saint among UK politicians brings me full circle as a blogger, as I began writing about and counting, counting, counting BBC bias during the Gordon Brown era.
How lovely.
Posted by Craig at 15:05