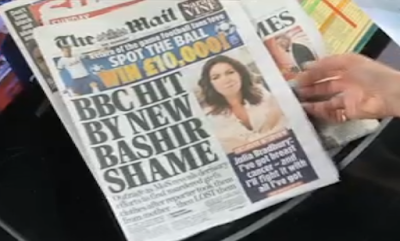 “The BBC has a really grim bit of reading in The Mail on Sunday. This is another Martin Bashir-related story. Goes on for pages and pages and it is tough stuff for BBC people to read”, said Andrew Marr this morning.
He didn't elaborate, or mention the story again.
This morning's BBC News Channel paper review also merely mentioned it, with Victoria Derbyshire laying heavy emphasis on her own words, “it claims”.
The Mail on Sunday's remarkable investigation into how Martin Bashir took the Babes In The Wood victim's bloodied clothes from her mother, and then lost them, focuses on how that was followed by “derisory” efforts to find them by the BBC.
The loss, the Mail reports, was only found out when the mother asked for them back to help police review the evidence and help convict the chief suspect.
As with the Princess Diana scandal, it's the allegations of a cover-up by the BBC that are particularly telling:

At the time, a BBC spokesman announced 'extensive inquiries' had been made to find them.

But we can reveal today that the Corporation failed to even carry out the most basic checks, including speaking directly to Bashir.

Key journalists who worked alongside him on the Babes In The Wood documentary also said they were never contacted.

Nor were the families of Karen and fellow victim Nicola Fellows, nor a forensic scientist named by the programme's editor as an expert who could analyse scene-of-crime material.

The acting director-general of the BBC at the time, Mark Byford, has also admitted no 'formal investigation' was held into the missing clothes.

Well might Julian Knight MP say in reaction, “These allegations, if proven, would amount to one of the most shameful episodes in the history of the BBC. This could be the BBC's Milly Dowler phone hacking moment.”

His Commons Culture select committee will be interviewing Tim Davie on Tuesday.

Update - The story was discussed during this morning's Broadcasting House paper review. Only one guest commented on it, namely  former Conservative MP for North Devon Peter Heaton-Jones, who also previously worked for...guess who?...yes, the BBC:

Paddy O'Connell: What is the front page of the Mail on Sunday, Peter?

Peter Heaton-Jones: Well, yes I thought I should dip into the world of journalism from my previous life Paddy, and so...the Mail on Sunday is obsessed with the BBC, has been for some time, shows no signs of waning. So you can read about the BBC and the Mail's view of it on pages 1, 2, 6, 7, 8 and 26, should you be so disposed. I love the BBC. I worked here for 20 years and I think that the licence fee is the right way to fund the BBC. Let me get that out of the way first. But the Mail says one thing in its editorial which I think has some substance to it, and it's this: They...quote, “The BBC's closed and haughty elite with its insistence on being judge and jury in any case where it comes under criticism, ploughs on regardless”. And I just think if there's one lesson for the BBC to learn, it's you can get it wrong sometimes, don't always defend yourself to the hilt if someone accuses you of getting something wrong.

Paddy O'Connell: And this front page is another scandal involving the disgraced journalist Martin Bashir.

Peter Heaton-Jones: Yes, “BBC hit by new Bashir shame”, they say on page 1 - and about 18 other pages. It's not a good story, which I don't think I want to go into detail about Paddy, but it's another example of how I think the Mail and certain other newspapers will try to find any chink in the BBC's armour. They are there, but they find them very actively.

He said it wasn't a good story, but the BBC obviously disagrees. They've taken onboard the Mail on Sunday's investigation.

As a result, the BBC has now issued an apology, saying they're “extremely sorry” over the loss of the murdered schoolgirl's clothes.

This is important, and needs exploring further, though the BBC website report - true to form - spins the 'cover-up' claim as wrong, to the BBC's advantage.

Maybe time will tell, or maybe it won't.

Whatever, well done to the Mail on Sunday, however many pages they took over it.