Tim in the kittens' den 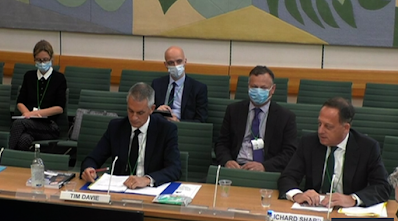 I've just caught up on the whole of Tim Davie and Richard Sharp's appearance at the Commons Culture Select Committee today.
If you missed it and want to give over 1h 20m of your life to watching it, please click here.
Various things struck me:
Firstly, just how far the BBC's tentacles reach. Four out of the very small committee of MPs attending - I counted six or seven at most [as one may have been a clerk] - declared their BBC affiliations at the start. All four had been BBC journalists in a past life, and one even publicly declared his continuing financial benefits from the BBC. [What about the others?].
Secondly, how plausible Tim Davie is. He still talks a good talk. BBC chairman Richard Sharp was less assured. And the third musketeer, Leigh Tavaziva - the BBC's chief operating officer - came across as little but a babbler of corporate-speak.
Thirdly, how soft the committee were on the BBC - including all but one of the Tories.
Most of the Tories were kind to the BBC. And the Clacton Conservatory MP Giles Watling, who initially declared his continuing BBC financial rewards, turned out to be especially kind to them. He cocked his head and knitted his brow in sympathy for their financial flight and 'loss of talent'. It was like eavesdropping via video on a conversation between Tim Davie and Giles from the Samaritans.
The SNP's John Nicolson [ex-BBC] quoted two contrasting emails from members of the public, one attacking the BBC from the left and one attacking the BBC from the right, and played the 'complaints from both sides' card, like he was some defensive BBC editor on Samira's Newsnight - which is intriguing. Are the SNP feeling much warmer towards the BBC now?
Talking of which, Billy Bragg's chum Labour MP Kevin Brennan helped John Nicolson prove his point by going after Sir Robbie Gibb and The Tories Atop the BBC over JessBrammargate. Wonder what BBC returnee Jess Brammar made of Labour's Kevin Brennan being on her side? At least she's not retweeted him yet.
Fourthly, only Julian Knight, the committee chairman, really sunk his teeth into the BBC - though oddly, despite what he said the other day about the Mail on Sunday's latest piece, he didn't go after the corporation over Martin Bashir.
Fifthly, Damian Green - the Europhile former Conservative high-up under Mrs May - kept quiet. He was one of the four former BBC people.
All in all, it was a very easy ride for Tim and Richard. So many questions that could have been asked weren't asked. They were in a den of kittens and politicians.
Posted by Craig at 17:35