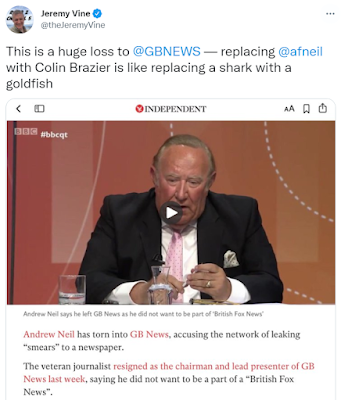 ...hasn't struck people as being very kind, or classy. Here's a flavour of the reaction:
Colin has replied:

On Monday I pointed out that Jeremy Vine is paid twice more than our PM - wages we are legally forced to pay via the BBC license fee. I think publicly-funded broadcasters need to be careful how they express personal opinions.
Read more: https://gbnews.uk/news/colin-brazier-the-bbc-needs-to-learn-to-survive-by-winning-and-keeping-customers-not-by-extending-a-statutory-hand-every-year-into-our-wallets/129194

Did he delete it off his own bat, or did the BBC tell him too?