The Bishop of Radio 4's 'Sunday' 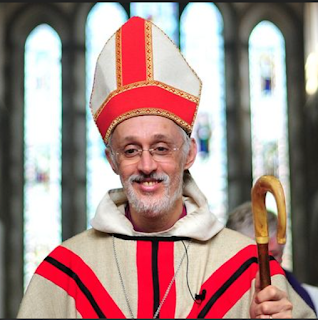 It's surely time now for David Walker, the go-ahead Bishop of Manchester, to be officially installed as Bishop of Radio 4's Sunday.
He's on the programme so often, usually receiving the BBC's blessing for one of his campaigns.
This week Sunday helped publicise his campaign against the Government's latest immigration bill.
If you didn't hear it yourself, here's a flavour of how it was framed today:

William Crawley: Good morning. On this week's Sunday, is the medieval idea of sanctuary coming back in a world of asylum seekers and refugees?

William Crawley: Still to come on Sunday, why being a Good Samaritan may soon be a criminal offence, according to the Church of England.

William Crawley: The Nationality and Borders Bill currently going through Parliament has angered some Church of England bishops. 12 bishops have signed a public letter this week accusing the government of effectively criminalising Good Samaritans. They say the bill would criminalise not only attempts to cross the border irregularly, nor even simply people-smuggling, but even those who take part in the rescue of boats in distress at sea. This week churches have also been welcoming Afghans who fled their homeland last month after the Taliban took control. The BBC's Carolyn Atkinson was at St Paul's church in Marylebone as volunteers welcome some of those refugees.

Naturally for Sunday, no one who thought differently on the issue was heard from, so here's a flavour of the response on Twitter instead:

And the Bishop of Manchester wasn't the only bishop given a bit of free advertising for his campaign this week. The programme began with Mark Strange, the go-ahead Bishop of Moray, Ross & Caithness campaigning about climate change, and here's how that was framed by Sunday:

William Crawley: Ahead of Cop26, the UN climate Change Conference in Glasgow taking place next month, faith leaders across the UK have united in a declaration, which they hope will raise up a new generation of advocates for climate justice. The Glasgow Multi-Faith Declaration calls on faith communities to make transformational changes in their lives for the sake of the planet and to speak truth to the politically powerful about their responsibilities. But what does transformational change look like in practical terms, electric cars, avoiding air travel, moving away from meat based diets, reusing clothing. I asked Bishop Mark Strange, Primus of the Scottish Episcopal Church, the Anglican communion's delegate to COP26 and one of the architects of this new multi-faith declaration.

William Crawley: Well, on this third commitment of speaking truth to power, when the UK Government, when Boris Johnson's government effectively, says the Government's most international priority is dealing with with the climate crisis and at the same time the Government is supporting a new coal mine or cutting taxes on flights in response to what we've been through with Covid, some have used the term 'hypocrisy' of this Government in describing what they say and what they are doing. Would you use that term?

Bishop Strange: I think I probably have used that term.

Again, no alternative voice was heard from.