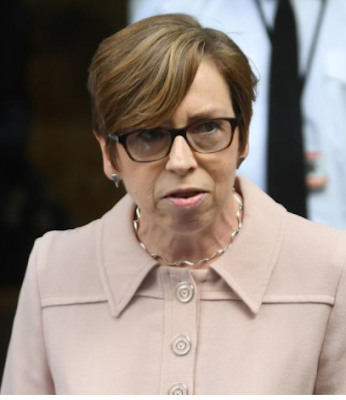 Thank you for your comments on the Open Thread. You've covered - and nailed - so much of the ground I would have covered, including the departure of BBC lifer Fran Unsworth.
Today's Sunday Times - featuring that photo of Ms Unsworth which always draws Rosa Klebb comparisons in comments fields - includes lots of BBC insider gossip, including claims that Tim Davie is glad to see her go because she's “stuck in her ways” and part of the “malaise” at the corporation.
Friends of Tim also give us some juicy quotes, including saying that he's engaged in “constant fire-fighting” and that “he feels he opens Pandora’s box every day, and only the bad stuff ever comes out”.
As far as the general exodus of BBC lifers go, any BBC source quips “More people are leaving the BBC than Afghanistan.”
And who's going to replace Francesca as Director of News and Current Affairs at SPECTRE the BBC?
The piece names four people: present Deputy director of news Jonathan Munro, Senior controller of news output and commissioning Jamie Angus, Digital director of BBC News Naja Nielsen, and Commissioning editor for factual and arts at Channel 4 Shaminder Nahal.
Mr Munro has 'issues' involving the debacles over Cliff Richard and Martin Bashir while Mr Angus is considered “lightweight”. Cue two more insider gossip quotes:

On Jamie Angus: “He’s a dilettante. When he was at the World Service, and your job is to know this stuff, I remember him saying he hadn’t heard of Waziristan, which was where bin Laden was hiding at the time.”
On Jamie Angus and Jonathan Munro: “Angus is a man who has risen without trace and Munro is a man who should have sunk without trace”.

Ms Nielsen is a recent arrival from Danish broadcasting, and “relatively unknown.” while Ms Nahal has all the baggage of being associated with left-wing Channel 4 and was jointly responsible for Black to Front, the channel's recent racist day when only black people appeared on the channel. “We were tired of taking small steps, say Vivienne Molokwu and Shaminder Nahal”, Broadcast reported her saying two days ago.
Especially as she previously worked for Newsnight, I'd place my money on Ms Nahal.
Posted by Craig at 14:20