Doctor Who vs the face-aches 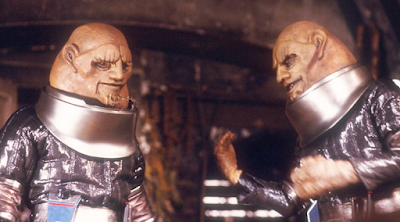 The days when Spiked never used to criticise the BBC are long gone.
They have a piece today about a Kirsty Wark-fronted programme called Womanhood which they say was “close to trans propaganda”:

It’s no secret that Doctor Who has been oddly tactful of late, with the thrills of time and space travel often seemingly taking a back seat to climate-change finger-wagging and lectures about historical racism / sexism. So I was a bit surprised to find myself irrevocably ‘triggered’ by something I saw in episode two of the new series: the Doctor, confronting an enemy whose features are entirely obscured by a battle helmet, yells, ‘Take your hat off, mate!’ – but when the enemy complies, revealing the hideous face of a Sontaran, she sneers, ‘Urgh – on second thoughts, put it back on!’.

Harmless? Perhaps. But only if there isn’t a single child anywhere in this country who looks even a little bit like a Sontaran – and, frankly, we all know that there are plenty. So why does the BBC feel it’s okay to show something that could lead to those kids getting bullied in the playground, when it is clearly so pathologically cautious about anything that could endanger any of the others? The answer, I’m sorry to say, is that ugly people have become the last under-represented minority on British television.

Indeed. Us beautiful people need to be 'allies' of the homely and the ugly, and Dame Cressida Dick should have a word with Doctor Jodie about her hate speech towards that poor Sontaran. There should be no place in our society for Sontaranophobia, even if Sontarans want to conquer the Earth and enslave us all.