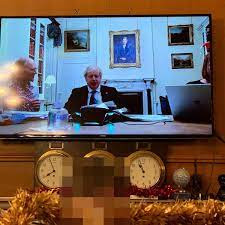 It’s quite late in the day, but I wanted to let the dust settle before sticking my neck out about Party-gate. There’s still no sign of a let-up, so I dillied and dallied until wallpaper-gate complicated everything by gate-crashing party-gate. Oh, and quiz-gate.

Obviously, Party-gate is divisive. It has certainly divided me. Afraid to watch BBC because of one’s mental ‘elf, one peeks through one’s fingers at Sky, where Beth Rigby is spoutin’ off about Boris’s shortcomings. I think it’s fair to float the idea that the BBC is on a similar mission, which is to Bring Down Boris.

The media class obviously hate Boris’s regime so they are all busily squeezing the last drop of juice out of last year’s was-it-or-wasn’t-it party at Number 10.

An illicit party for the toffs while the ordinary people obediently abided by the rules? (If they did)

Whether the media is sincere or purely politicking, we can’t be sure, but are Beth Rigby and her cohorts really and truly incandescent with fury, or is there a soupçon of malicious satisfaction in there?

“A Party!” they exclaim! “During lockdown! A lockdown that was both instigated and violated by the Tories themselves!  One rule for them and another for us!”

Fair point!  But the media weakens their case by making a fuss about the wine, the cheese, the unspecified nibbles, and….  tinsel!  Gilding the lily that way makes all the ire look petty and spiteful.

Yup. It’s probably a disgrace!! But Isn’t the outrage beginning to look a little laboured and quite a lot insincere?

I ask myself, is it valid to tie the privileges enjoyed by Boris and the spads so tightly and so inextricably to the restrictions and sacrifices that we lesser beings complied with last year? (If they did) Are the two situations truly worthy of being pitted against one another, or are they entirely separate?  I’m not too sure about that.

Many of us are uncomfortable about the hypocrisy, and hypocrisy it surely is. Or is it? And if it is, to what degree? Yet I can still see how government-haters got themselves worked up about it, but hypocrisy isn’t confined to last year’s bend-the-rules party. Hypocrisy and double standards are everywhere. Not saying that that’s a good thing, but don’t we reluctantly accept a bit of hypocrisy as a grim fact of life?   Maybe on this occasion, let’s choose a better noose with which to hang ourselves?

The pain of bereavement is heightened when others, oblivious to your suffering, seem to be enjoying themselves, but when that happens  - in my own experience at least - you neither begrudge nor resent other people’s happiness. Loss and grief needn’t be shackled to resentment. because the two emotions aren’t co-dependent -  in my opinion. (Those are my principles and if you don’t like them I have others.)  Nana Akua gave a thoughtful monologue about this particular issue the other day on GBNews. My views still ricochet from one position to another.

Allegra Stratton and the spads giggling over how to pitch the not-a-party to a hungry press pack was bad, but I found it even more disturbing to listen to Rigby (and I’m guessing her ilk at the BBC) continually announcing that  “the public is incensed” when in reality, it’s the media itself that’s incensed. The media is at once implanting and projecting outrage onto ‘the public” because it smells blood and thinks it’s a good time to cancel Boris and topple the Tories.

From a street in a northern constituency Sky airs ‘random’ vox-pops. The reporter asks two passers-by how incensed they are about Party-gate. The answer is: “Please let’s just move on now”.  Then they close in on a blue-haired battleaxe chewing on a wasp. She obligingly regurgitates Beth Rigby’s words as verbatim as she can manage. She is outraged!

They put her on a loop. On Sky; on the hour.

Thus, the media presents their own opinion as “what people are sayin’ “ with the kind of circularity that eats its own tail, and it occurs to me yet again that the media is actually running the country.

Rigby and her ilk at the BBC teach the viewers what to think, who to vote for, what to be angry about, and coerce you into believing you thought of it all by yourself.