The Bishop and the BBC 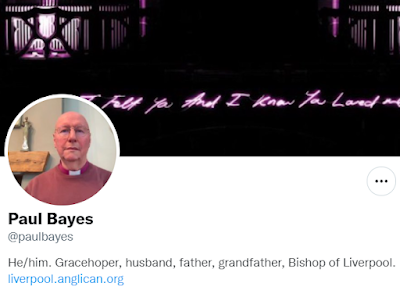 This - courtesy of the Church Times - from the go-ahead Bishop of Liverpool really does speak volumes. In fact, it pretty much says it all:

THE Bishop of Liverpool, the Rt Revd Paul Bayes, has praised the BBC for its “impartial” reporting of the Remembrance Sunday bombing in his city when other media attacked the refugee and asylum system and faith groups that had supported Emad al Swealmeen, who was killed when his bomb exploded in a taxi.

Bishop Bayes was speaking during his maiden speech in the House of Lords, on Thursday, in a debate on the value of the BBC. He said: “The journey of the young man concerned provided a fine opportunity for the naïvety of people of faith to be exposed, or for the systems by which people seek refuge to be deplored. These words had little purchase in Liverpool, where a number of organs of commercial media have been deeply and permanently distrusted for 40 years.”

The Bishop appears regularly on Radio 4's Sunday programme, which provides virtually a second pulpit for him.